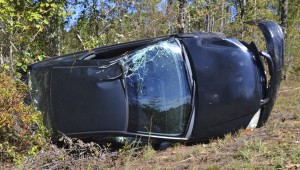 Mikaela Stewart was driving with her 4-year-old sister towards the Troy Public Library when a car coming from the opposite direction approached her vehicle up the hill, in the middle of the road.

“There was a car coming in the middle of the road, and I over corrected it,” Stewart said.

According to Stewart, she lost control of her black 2002 Honda Civic as she tried to avoid a collision with the other vehicle. Stewart’s car went off the road and flipped on its side.

Passers-by helped Stewart and her sister out of the car, she said. However, the car she was trying to avoid did not stop.

Neither Stewart nor her sister suffered any major injuries. Both of them were wearing seatbelts.

“I’m just really glad that my sister and I are okay,” Stewart said. “I want to thank the people who stopped and helped us.”