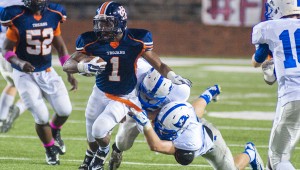 Charles Henderson High overcame a slow start in the first half to dominate the second half and claim an important 30-7 Class 5A, Region 2 victory over Rehobeth Friday night in Troy’s Veterans Memorial Stadium.

The Trojans built a 9-7 halftime lead, but outscored the Rebels 21-0 in the second stanza.

Senior quarterback Austin Ingram was 20-for-23 in passing for 259 yards and four touchdown passes, while hitting a perfect 13-of-13 in the second half.

CHHS improves to 6-2 overall and 4-1 in Region 2 competition, and travels to Booker T. Washington Friday to wrap up region play. A win at Booker T. would secure a playoff berth for the Trojans.

Each defense stood strong in the first quarter, with Rehobeth having three possessions and Charles Henderson two, with neither team scoring entering the second quarter.

The Trojans got the ball with 10:30 left in the first half and moved 60 yards in 13 plays, with Ingram hitting wide receiver Reilly Fox for a 7-yard touchdown catch, and Ben Salmon nailed the extra point for the 7-0 lead with 5:19 remaining.

Dixon picked up a key first down on the drive when the Trojans had fourth-and-one at the Rehobeth 16, and running from the wildcat formation, Dixon scampered to the Rebels’ 11 for the first down. The Trojans would score two plays later.

Rehobeth got the ball back at their own 22 on the ensuing kickoff, but facing fourth-and-eleven elected to punt from their own 21. CHHS senior Richard McBryde then broke through to block the kick, which rolled through the back of the end zone for a safety, and a 9-0 CHHS lead with 2:55 remaining in the half.

The Rebels got the ball back with 1:12 left in the first half and quickly mounted a five-play scoring drive, with quarterback Trey Tate hitting Caleb Knighton for a 7-yard touchdown reception. The extra point by Fernando Balden was good, and the Trojans carried a 9-7 lead into the locker room at halftime.

Rehobeth attempted an onside kick to open the third quarter, but the Trojans recovered and took over at their own 40.

CHHS later moved 61 yards in four plays for their next score, with Ingram hitting Dixon for a 34-yard gain to the Rehobeth 27, and three plays later Ingram connected with Smith for a 23-yard TD, and Salmon’s extra point put the Trojans up 23-7 with 1:40 remaining in the third quarter.

The Trojans scored again on their next possession, with Ingram connecting with Dixon for a 33-yard touchdown, and Salmon’s kick put CHHS up 30-7 with 9:40 left in the game.

The CHHS defense was inspired in the second half, not allowing a Rehobeth first down until there was less than nine minutes in the game. The Rebels would not cross mid-field until late in the fourth quarter and that drive ended on an interception in the end zone by Trojan defensive back Bryson Gandy.

CHHS was led on the ground by freshman running back Jared Wilson with 49 yards on 13 carries, while Dixon picked up 33 yards on 14 attempts.

CHHS Head Coach Brad McCoy was not pleased with the first half performance, but proud of the way his team turned up their focus and effort in the second half.

“Overall I think we played a much better second half than we did the first half,” McCoy said. “We know what kind of team we have, and what we have the capability of doing. We showed that last week, and to come out and score nine points in the first half was disappointing. I think it had a lot to do with motivation. You can’t have a certain mind set about a team other than what you know on video.

“Rehobeth showed they came out to win the ballgame tonight, and I don’t think we were really ready to be honest with you. We made some adjustments in the second half, and we came out and played a whole lot more effort than what we had in the first half.”

CHHS plays its final region game on the road at Booker T. Washington in Tuskegee this Friday.