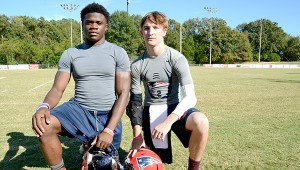 The Patriots faced the Autauga Academy Generals in a region matchup last Friday and lost 19-7, but while the Patriots lost to the Generals, it was one of the three lowest scoring games for Autauga this season.

Rush Hixon, starting quarterback for the Patriots, said his team had done a great job on defense in order to hold the Generals to just 19 points last Friday.

With 18 tackles last Friday, Jeremy James helped lead the defense for the Patriots against Autauga. James said the team had focused more on offense this last week of practice.

“I feel like we can beat them, from what I saw,” James said. “Our defense did pretty good Friday night. We stopped the star player on their team from what he did the Friday before. We did OK. We’re trying to score and get more points on the board and just really play hard this Friday.”

Escambia is currently 5-0 in the region and 6-0 for the season, but has faced many of the same opponents Pike Lib has this season.

The Cougars beat Autauga and Monroe Academy earlier this season, but both games were close. Head coach for the Patriots, Gene Allen, said having already played Monroe and Autauga gave the Patriots a chance to become accustomed to a faster pace and explosive offensive backs.

“Them being undefeated doesn’t really matter,” Allen said. “It’s to the point now that it’s a region game, and we know that we’ve got to get another region win in order to get into the playoffs. We would like to go ahead and do it this week. It helps too also that the head coach at Escambia used to be the head coach at Charles Henderson, so a lot of our kids grew up knowing him. It’s kind of a mutual thing. We know that they’re going to be good and I feel like we’re a lot better than we’ve been in other years.”

The Patriots kept practice loose on Thursday working without pads, and Allen said the team had changed their attitudes since the beginning of the season.

“I feel like our kids know whether we were playing here or there against Monroe or Autauga, we could have come out on top,” Allen said. “We know we’ve got a good chance. We’re just going to play like we’re supposed to, protect the ball and make tackles.”

Kickoff between the Patriots and the Cougars in Atmore is set for 7 p.m.