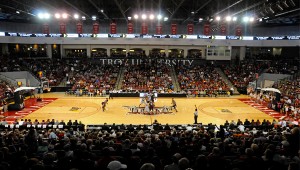 The Troy University men’s and women’s basketball teams will host a fan day Saturday prior to the Trojans’ football game against Appalachian State, the school announced Wednesday.

Fans will have the opportunity to meet Trojan men’s and women’s basketball players, pick up posters and get autographs at the event.

The Trojan men’s team heads into its second season under the direction of head coach Phil Cunningham. The team finished eighth in the Sun Belt Conference last year with a record of 11-20 overall and 6-12 in conference play.

The men will open up their regular season Nov. 14 when they host Brewton-Parker College.

The Troy women’s team is coming off its best season since their 2008-09 campaign. The Trojans finished tied for fifth in the Sun Belt with an overall record of 12-18 and a conference record of 8-10.

The women will be lead by third-year coach Chandra Rigby and open their regular season Nov. 14 at Auburn.