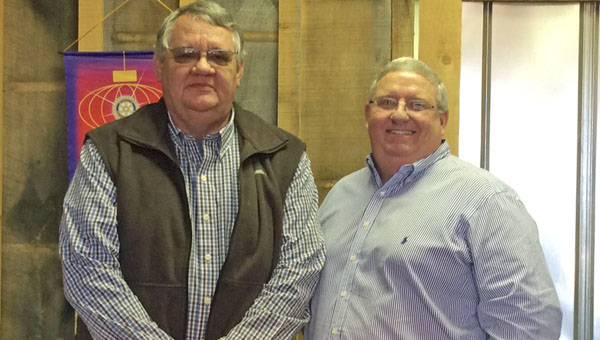 Pike County Commissioner Robin Sullivan was the program guest of Rotarian Harry Sanders at the Wednesday meeting of the Brundidge Rotary Club.

Sullivan was first elected to the Pike County Commission in 2004 and again in 2008 and 2012. Sullivan has served as the chairman of the Commission but admitted that he came to the Commission as a greenhorn.

“At the time, I didn’t know a lot about county government so I had a lot to learn,” Sullivan said. “New commissioners were required to take a 52-hour course and I learned a lot from the course and from other commissioners. I found that most of us were in the same shape in the funding issues that we faced.”

Sullivan said a main issue that continually faces the Pike County Commission is the maintenance of the county roads.

“We always need money for roads. We were fortunate to get ATRIP (Alabama Transportation Rehabilitation and Improvement Program) funds in the amount of $12 million,” Sullivan said. “And those funds were desperately needed.”

Sullivan said the county is responsible for roads that lead into cities and cited Elm Street and Highway 93 as an example.

“We have to redo a bridge and were planning on a project of 28 feet and the government says it’s got to be 41 feet,” he said. “That makes a big difference.”

“That’s coming in the near future and that’s going to be a big and costly project,” he said.

Litter is another constant issue before the county commission and Sullivan said the commission is getting some help with state inmates.

“For a while, liability insurance was an issue but that has been cleared and we are able to get inmates to help clean the roadways and that is a big help,” he said. “Garbage collection is a problem because about half of the customers won’t pay the contractor.

“Garbage collection has always been a big issue. When the Commission was in the trash business, it just about broke us.”

Sullivan fielded question about the Commission’s district lines and the difficulty in establishing district lines for six districts in a county with a population of about 33,000.

“The lines have to be established with only a two percent variance,” he said. “And, we know that not everyone is counted. It’s not a requirement that you have to respond to the census. A lot of people just don’t trust the government and don’t respond, so they don’t get counted.”

Sullivan said the population count drives funding that comes back to the county and non-response can have a negative impact.

“But, we know we have to put aside our differences and get things done and we do,” he said. “What I would like to see is a four-member commission with a chairman who is elected countywide. That would be a step in the right direction for us.”