Arrests made in four-wheeler theft 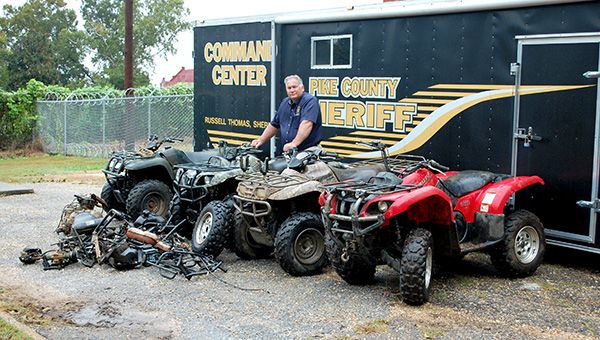 In a combined effort between Troy Police Department and the Pike County Sheriff’s Department five stolen four wheelers have been recovered in Pike County.

Three 17-year-old males were arrested following the recovery of four four-wheelers, two of which were reported stolen from Coffee County.

Sheriff Russell Thomas said much of the investigation could not have been conducted without the collaboration between Troy Police and the Sheriff’s Department.

The agencies were investigating the theft of the two four-wheelers from Coffee County and two from Pike County when they discovered and recovered a fifth stolen four-wheeler.

“They had actually started their theft ring in Coffee County and then traveled to Pike County,” Thomas said. “They stole two four wheelers from here and as a result we recovered another four-wheeler.”

Chief Jimmy Ennis with the Troy Police Department said the recovery of the four-wheelers showed good observation skills from the officers in both agencies.

“This is a good example of officers being observant when they’re ‘out in the field,” Ennis said. “And it’s also a very good example of communicating with other agencies and working together to solve crime.”

The Sheriff’s Department on Oct. 1 received the first report for the stolen four-wheelers.

Thomas said the collaboration between the two agencies was crucial in not only recovering the four-wheelers but in also stopping more thefts from occurring.

“It’s very important because they don’t stop,” Thomas said. “When a thief starts he doesn’t stop until he’s caught…You never know at that age what it might progress into.”