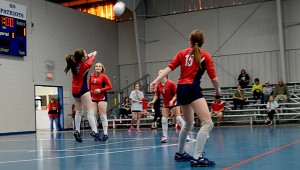 Senior for the PLAS Patriots Grace Capps jumps for a ball during a set against the Glenwood Gators. The Patriots lost to the Gators Tuesday ending their chances of Elite 8 play in Birmingham.
MESSENGER PHOTO/SCOTTIE BROWN

The Pike Liberal Arts volleyball team matched up with the Glenwood Gators Tuesday in a playoff game that would send the winner into the Elite 8 in Birmingham.

The Patriots came out strong early on, rallying to beat the Gators 25-22 in the first set.

Following Tuesday’s loss, Patriot head coach Mendy Avant did not have much to say regarding the game.

While Avant said the team had been working on communicating better together as well as keeping serves and hits out of the nets, the team wracked up only 11 serving aces, which were outweighed by their 17 missed serves.

Despite an overwhelming amount of missed serves and 13 attack errors total for the four sets, assistant coach Allie Park said the girls were able to keep a high level of intensity throughout the match.

“They stayed intense,” Park said. “They all played hard and wanted to win. Even the bench was intense.”

The Patriots finished their season with a record of 8-12. Park said it was bittersweet to see the season end, especially for the seniors.

“It’s bittersweet for the seniors as it was their last game, but the younger girls will surely have a big role next year,” Park said. “Mya Terry and Sam Yarborough, in particular, who were on the court a great bit this year. They are all great girls, and it’s going to be hard not practicing tomorrow.”