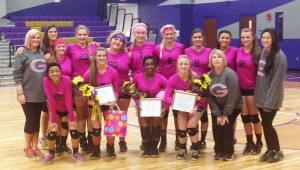 Hughes, just 43 when she passed away from breast cancer last September, had been coaching for 13 years at Goshen.

Tuesday night, the Goshen varsity volleyball team honored Hughes with the team’s third-annual “pinkout” in their game against Ariton.

To commemorate Hughes, the Goshen volleyball team sported special pink jerseys and all who were attending were encouraged to wear pink. The school even had special shirts made that read, “You don’t know how tough you are until being tough is your only choice.”

Though the Eagle volleyball team won in a clean, three-set sweep of Ariton (25-21, 25-13, 25-19), head coach Amy Warrick and the players were even happier to win on the night that they remembered their former coach.

“These girls are fighters and that is everything Dee was about was fighting,” Warrick said. “Every time they hit the court, they fight hard.”

Tuesday was also senior night for Goshen and Warrick said the team wanted to win not just for Hughes, but also for the team’s three seniors.

Goshen’s offensive attack was dominating all night. The Eagles fought through a brief scare in the first set, after falling into an 18-16 deficit. But the Eagles rallied behind two key Kati Thomas kills and won the set.

From there, Goshen easily won the next two sets behind big offensive nights from Thomas, who had 15 kills, and Casey Allen who led the team with 20.

Even with big offensive performances from Thomas and Allen, Warrick said she was even more impressed with the play of the backline.

“They (Thomas and Allen) get a lot of show because they are the hitters,” Warrick said. “But then also my back row did awesome tonight. I just can’t even tell you that Casey and Kati can’t even do what they did without the play of our back row tonight.”

Goshen improved to 20-6 on the season and will face Northview and Zion Chapel Thursday for the finale of the regular season.