Griffin retires after more than 47 years with ALDOT 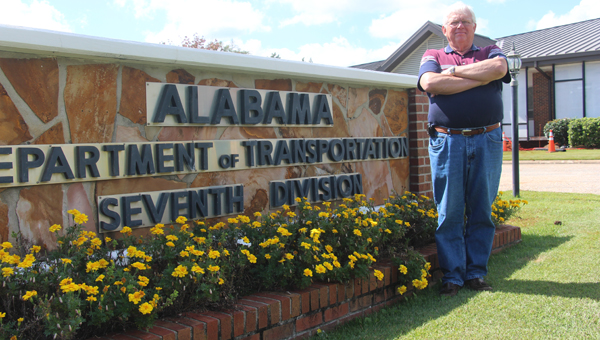 Mike Griffin served as district engineer for the Alabama Department of Transportation before retiring in September. His career with ALDOT began in high school, when he worked with a survey crew. He worked with the agency through college and for nearly 50 years before retiring. (Messenger Photo / April Garon)

In the more than 47 years Mike Griffin was with the Alabama Department of Transportation, he has seen Troy and the rest of his division change and evolve.

One of the biggest projects Griffin was a part of was the conversion of U.S. 231 from at two-lane to a four lane. He said seeing projects like that come to fruition has been satisfying.

“When I started, we were just beginning the four-lane process on 231, I saw most of that completed. I saw it from a two-lane road to what it is today. There’s a huge amount of satisfaction in being a part of that. No one person can take credit. I was just a part, I had some part in guiding the people that worked on it. There’s a lot of satisfaction in seeing those things completed.”

Griffin, who retired in September, started working for ALDOT in June of 1964 cutting line with a survey crew while he was a high school student at Charles Henderson High School. He then earned a civil engineering degree at Auburn University and worked his way through college as an engineering assistant. After graduating from Auburn, he came back to Troy to work as a party chief and later a project engineer. In 1975 Griffin became district engineer in Troy, and held the position for 14 years. In 1989 he became division maintenance engineer, and in 1997 he became division engineer, in which he work for 17 years until his retirement. His interest in working for ALDOT started when he was 8 years old and would tag along with his father, Grady Griffin, who was a materials engineer that worked for ALDOT for 30 years.

“I would see the equipment out there, and see men moving dirt, building bridges, culverts, and laying pipes, which enthralled me then, and I was lost from them on,” Griffin said. “My dad was always willing to teach me things that I was curious about and he answered my questions. I was interested and I liked it.”

Griffin said some of the most vivid memories he has of his time at ALDOT are when people pulled together during hard times.

“I’ve seen some really tragic events with flooding and hurricanes,” Griffin said. “I’ve seen the people during those events step forward and the best part of them shows through as they help their neighbors and their communities. There are people here among those groups. The hardest times bring the best memories because of how the people react.”

What Griffin will miss most about ALDOT will be the interaction with people.

“In my interactions with all the people, there’s generally opportunities to help in those instances,” Griffin said. “I’ve formed a lot of long lasting friendships during my years of work. Everything I’ve got, I owe to the department. It’s filled with good people, skilled people. I’ll miss being a part of that everyday.”

Griffins plans to travel with his wife, Bonnie, and work on his farm in retirement.