March takes Jesus to the streets 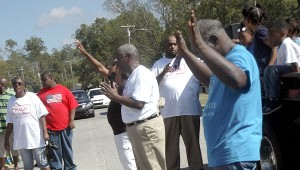 A prayer service was held at Pike County High School following the March for Jesus through downtown Brundidge Saturday. Hands were lifted in praise for the Lord’s many blessings on the annual March designed to take Jesus to the community.
MESSENGER PHOTO/JAINE TREADWELL

Fifteen years ago, the Concerned Christians of Brundidge took to the streets in an effort to take Jesus out of the four walls of the church and to the community.

“The Lord blessed us then and He has blessed us ever since,” said the Rev. Willie Moultry, CCOB chairman.

The 15th Annual March for Jesus was held in Brundidge Saturday and, once again, Moultry said, the March was blessed.

“We didn’t have as large a crowd as we’ve had in the past but it was Troy University’s Homecoming and that cut down on the crowd,” Moultry said. “But it was a blessed March and a blessed day.”

The March for Jesus originated at Galloway Park and marched along Main Street to Pike County High School for a prayer service.

“The reason we start the March at Galloway Park is because the park was the first project of the CCOB,” Moultry said. “Fifteen years ago, Galloway Park was closed. There was some trouble up there and the city closed it.”

Moultry said members of the newly organized CCOB went to Mayor Jimmy Ramage and told him they would like for the park to be reopened and pledged themselves to the project.

“The park was rundown and we got in there and cleaned it up and fixed it up and the City reopened it,” Moultry said. “So, every year, we begin the March for Jesus at the Park.”

At the prayer service at PCHS, Moultry said people of all denominations come together to worship.

Following the Prayer Service, everyone was invited back to Galloway Park for lunch, fellowship and more prayer and praise time.

Moultry said a man, a known alcoholic, came to the park looking for food and was told to just grab a hotdog; he didn’t have to pay for it.

The man was so moved by the generosity and Christian love around him that he wanted to do something in return.

“He got out there and started cleaning up around the park,” Moultry said. “That’s what the March for Jesus is all about – taking Jesus out of the four walls of the church and to people like him.”

Moultry expressed appreciation all those who participate in the March for Jesus, for their hard work, their support and their attendance.

The March for Jesus is held annually the second Saturday of October. The CCOB begins meeting weekly about six months before the event and will meet this Thursday at Galloway Park to discuss this year’s event.

“Then, we’ll meet monthly until we start planning next year’s March for Jesus,” Moultry said. “Anyone who is interested in joining us is invited.”

Moultry may be contacted about the CCOB at Moultry’s Auto Repair on North Main Street in Brundidge.