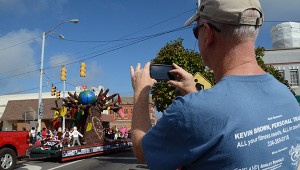 The parade boasted a variety of entries from vintage cars all the way to beauty queens, and Kathy Sauer, director of the Chamber of Commerce, said the chamber was pleased with the way this year’s theme of “We Are One: Getting Back to Our Roots” was depicted.

Dan Smith, director for the parade, said he had received nothing put positive feedback from those who came to the parade Saturday.

“It was, we thought, an exceptional turnout,” Smith said. “We have heard nothing but positive comments one after the other the day of the parade, at the football game, all weekend and even today.”

This year’s parade route changed due to construction on Three Notch Street, but Smith said the change in route offered variety, a shorter distance to The Square in downtown Troy and the starting point was closer to campus for students than the previous route. “Because the starting point was now right in the front yard of the students, so when the sororities and fraternities and campus organizations that participated came to the parade to line up they don’t have as far too go,” Smith said. “Many of them can walk. That was one of the most positive things we heard.”

Smith said the parade route’s change may become permanent, but the committee would continue to receive feedback and comments before making a final decision.

Leigh Grissom, a local Pike County resident, came to the parade with her husband and two children, Emma Kate and Wyatt. Grissom.

“We come just to support the community, and so they can enjoy a parade,” Grissom said.