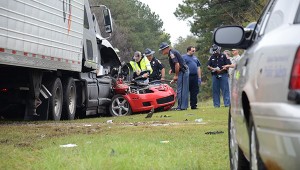 Local law enforcement agencies and Alabama State Troopers responded to a two-vehcile wreck on US Hwy 10 just outside of Brundidge Tuesday morning just before 11 a.m.

It is currently unclear what caused the wreck.

The incident is still under investigation by Alabama State Troopers and other law enforcement agencies. More information will be released about the incident as it becomes available.