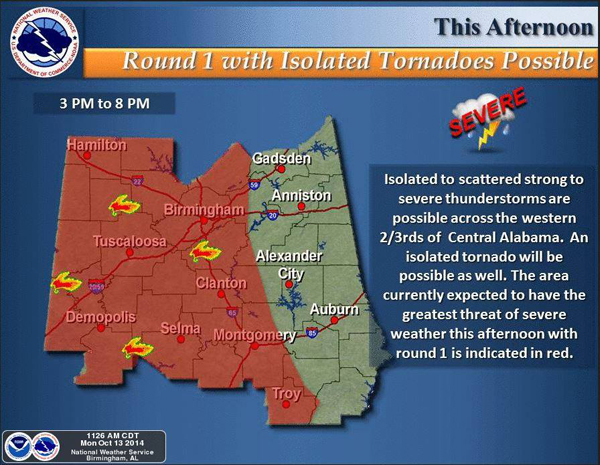 The National Weather Service in Birmingham has issued a significant weather advisory for northern Pike County and eastern Montgomery County.

The warning related to a strong line of thunderstorms near Linwood, moving north at 40 MPH.

Although severe weather will be possible across Central Alabama, according to the NWS, areas expecting the greatest threats will be west of a line from Selma to Birmingham. The main threats will be damaging straight line winds of 60 mph or greater and isolated tornadoes.

During this timeframe, temperatures will be around 75 degrees, with three inches of rain, which can cause localized floodings, Anderson said. Flash flood watch has been issued for locations.

There will be possibilities of damaging straight line winds and isolated tornadoes in Troy areas. However, the risk of tornados in the far east region is not as high as the far west.

The line of storms will push into Georgia by Tuesday evening. The line should be weaker to some extent, however, high wind and a couple of tornados remain a possibility. Isolated supper-cell thunderstorm may be possible in the far southeast late afternoon.

Anderson said the severe weather is likely to come to an end Tuesday afternoon in Troy areas with the low temperature around the 50s and the high around the 70s later in the week.