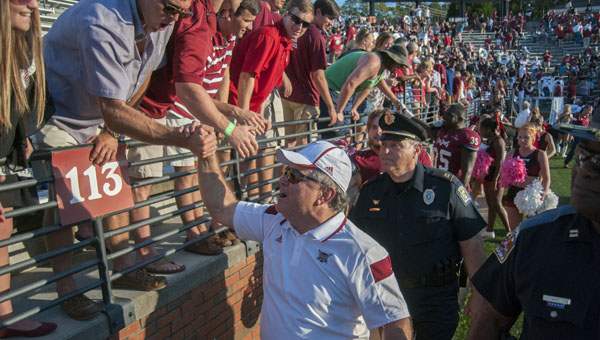 Troy head coach Larry Blakeney and his players were in good spirits Monday morning for the weekly press conference after notching their first win of the season Saturday in a 41-24 victory over New Mexico State on homecoming weekend.

Several players noted a difference in the tone of practice leading up to the game, which could be attributed to Blakeney’s retirement announcement earlier in the week.

“Well I’d hate to know that the guys got fired up because I’m quitting,” Blakeney said. “I think that anytime you tweak the emotions of a bunch of humans you have a chance to get a positive or a negative response. It was time to maybe hope that they would be motivated by what we said to them, and I’ve never had as locked in a football team as I had in the room last Sunday night when I told them what I was going to do.”

Troy’s determination was evident Saturday from the team’s opening possession, a 12 play, 85-yard drive capped off with Brandon Silvers’s fourth touchdown run of the year.

On the ensuing New Mexico State possession, the Trojan defense forced a quick three-and-out, and Silvers drove the offense into field goal range, allowing kicker Ryan Kay to convert a 28-yard field goal and put the Trojans up 10-0 midway through the first quarter.

But the Trojans, who matched just about everything the Aggies threw at them Saturday, scored just seconds later when Chandler Worthy took the ensuing kickoff 89 yards for a TD making it 17-7 in favor of the Trojans.

Silvers had been one of the most verbal players during the week, trying to motivate his team to notch their first win of the season. He said that the week of practice is always easier coming off a victory.

“It feels great, and it’s about time,” Silvers said. “It feels a lot better to come in and talk about a win instead of a loss. Everyone was excited about it after the game and we just want to keep on winning.”

The Troy defense was also stout Saturday, sacking New Mexico State quarterback Tyler Rogers four times and forcing four turnovers. Prior to Saturday, the Aggies had not allowed a sack all season.

Offensively, the Trojan rushing attack was potent all afternoon. Running back Brandon Burks led the team with 176 yards rushing on 10 carries, and Silvers added 83 yards with one TD on the ground.

Running back Jordan Chunn also made his mark on the game, scoring on runs of two and 18 yards.

The progression of the offense can also be attributed to the development of Silvers at this juncture in the year, which was a question coming in after the loss of Corey Robinson, one of the most prolific passers in the history of the Sun Belt Conference.

“I think it’s a big factor that he’s evolving as a player at that position, and the style of play that he uses allows him to be good for us,” Blakeney said.”

Silvers was also efficient through the air, completing 23-of-30 passes for 211 yards and a TD. His lone touchdown pass of the game came on a 35-yard pass to Worthy with three minutes left in the game to put the Trojans ahead comfortably 41-24.

“Well they both deserve it,” Blakeney said. “People want to talk about the kick return but (Worthy) made at least a couple tackles in punt coverage as a gunner, and that ain’t no easy work. I’m really proud of his senior campaign to this juncture. (Stadom) just stays busy and makes plays, I think we gave him some opportunities with the twist game that helped him a bit.”