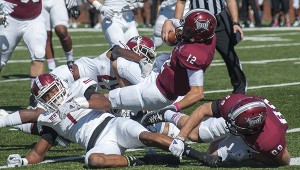 Troy QB Brandon Silvers crosses the goal line to score the Trojans’ first touchdown for the afternoon as they beat New Mexico State during Homecoming, 41-24 Saturday afternoon for their first win of the season.
MESSENGER PHOTO/JOEY MEREDITH 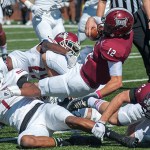 Troy QB Brandon Silvers crosses the goal line to score the Trojans’ first touchdown for the afternoon as they beat New Mexico State during Homecoming, 41-24 Saturday afternoon for their first win of the season. MESSENGER PHOTO/JOEY MEREDITH 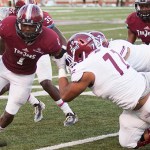 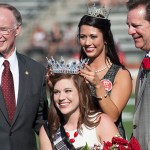 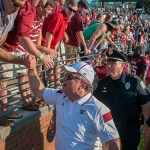 The Troy Trojans have been through a difficult and emotional 0-5 season only amplified by the announcement of head coach Larry Blakeney’s retirement, but fans couldn’t have scripted a better win than the Trojans’ 41-24 homecoming win over the New Mexico State Aggies.

Troy came out of the gate with something to prove on Saturday, and it was apparent after Brandon Silvers capped of the opening drive by 12-yard rush into the end zone.

After forcing a quick three-and-out, the Trojans went right back down the field, but a penalty forced the Trojans to settle for a field goal taking them to a 10-0 lead.

New Mexico State wouldn’t back down to Troy, and answered the Trojans’ 10-point lead with a 53-yard touchdown run from Larry Rose III.

Senior Chandler Worthy knew he had to make a play for his fellow Trojans, and he did that with an 89-yard kickoff return that pushed Troy to a 17-7 lead. Another Ryan Kay field goal sent the Trojans into the locker room at halftime with a two possession lead.

The Trojans managed to put up over 300 yards of total offense in the first half, but did so through their rushing game instead of through the air as most fans had become accustomed to this season.

The driving force for the ground game was Brandon Burks, who finished the game with 176 yards on only 10 carries, which included a career-long run for 53-yards in the first quarter. Silvers added another 83 rushing yards for the Trojans in the first half along with 211 passing yards.

“We had plans to throw the deep stuff but didn’t throw it as much as we planned, because everything else was better,” Blakeney said.

Blakeney said his team went into the game focusing on two particular areas the team needed to fix in order to compete like he knew that could.

“I’m proud of the rushing and our third down conversions,” Blakeney said. “We went in saying we needed to run the ball better and need to convert third downs at a higher rate before we could get rolling.”

For the game Troy finished with 360 yards on the ground and 571 total yards, and unlike other games this season they finished what they started in the first half.

“It was agonizing to deal with, because you want them to have a chance to win so badly,” Blakeney said. “Without cheating you’d just about do anything to see them do what they did today with the band and the students and in the locker room. I mean it was fabulous and wild and something that if you play this game you need to experience.”

The win was a long-overdue experience for his players topped with Blakeney tying his coach and mentor Ralph “Shug” Jordan with 176 victories. Following the win, the Trojans humble leader couldn’t be happier for his team.

“I think it’s important that they, within reason and with good decisions, enjoy this win,” Blakeney said. “Have a good time. Let folks pat you on the back a little bit for playing good enough to win. I’m excited for them, and I hope we can add another win to it.”