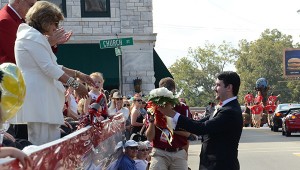 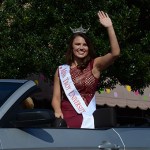 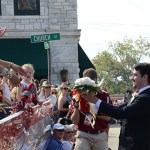 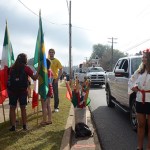 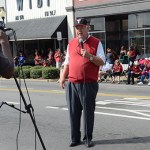 Mike Amos, with “Today in LA,” starts off the homecoming parade Saturday for Channel 2 on Troy Cable. 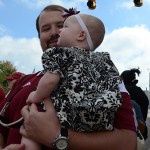 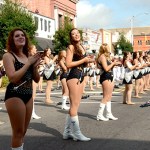 Troy University’s Sound of the South band stops during Saturday’s parade to perform for the crowd. MESSENGER PHOTO/SCOTTIE BROWN 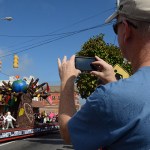 Although the route for this year’s homecoming parade changed, hundreds still lined the streets around the Square Saturday morning in downtown Troy to celebrate homecoming and watch the numerous entries in the parade.

The theme for this year’s homecoming was “We Are One: Getting Back to Our Roots,” and Phi Mu president Erin O’Quinn said the sorority had taken a different perspective to the theme this year.

“Since the theme was getting back to our roots, we figured what better way than a yearbook to flashback through the different times Troy has gone through,” O’Quinn said. “With Troy Normal School, our sorority being the first founded at Troy, we thought this was the best way to tie in Troy and the Palladium and a flashback.”

The floats ranged in sizes for the parade, and O’Quinn said the sorority had put in countless hours making their float.

“It was a lot of hours,” O’Quinn said. “We have 159 girls that have been working on it for weeks. It’s been a lot of work, but it’s definitely paid off. We know going into it, it’s going to be like that so it’s a lot of fun and a lot of time to hangout with our sisters.”

Leigh Grissom, a local Pike County resident, came to the parade with her husband and two children, Emma Kate and Wyatt. Grissom said her and her family had come to the parade just about every year.

“We come just to support the community, and so they can enjoy a parade,” Grissom said. “We’ve almost come every year.”