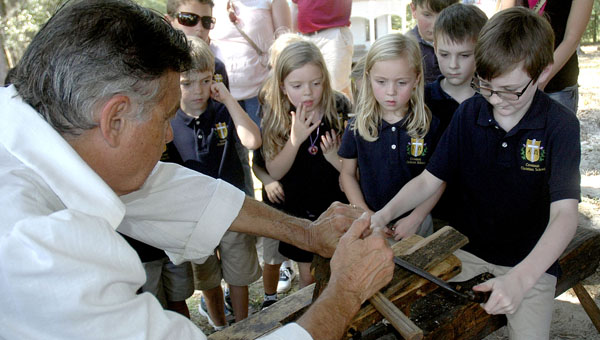 MESSENGER PHOTO/ JAINE TREADWELL
Students from Covenant Christian School in Troy participated in Pioneer Day at the Pioneer Museum of Alabama Friday. Carter Stroud learned to use a drawing knife.

A thousand children from 14 area schools now know more about pioneer days than many other youngsters because they have had their hands on history.

The Pioneer Museum of Alabama in Troy hosted a special Pioneer Day for schools on Friday and craftsmen and re-enactors brought history to life in a way that it will be long remembered by the young students.

Nikki Payton, who teaches fourth grade at Greenville, has been bringing her students to Pioneer Days for several years.

“Pioneer Days correlates with our curriculum of study and it gives the students a real-life idea of how life used to be,” she said. “It’s a good teaching tool and it makes learning fun.”

“When the cannon goes off it scares you and shakes your insides,” said Taylor Perry of Wares Ferry Elementary School.

Many of the children had not seen food cooked on a wood stove or over a fire in the ground or seasoned in a smokehouse.

And, they learned the difference between a one-seater and a two-seater outhouse and that both have spiders and corncobs.

The students got to “climb aboard” a steam driven train and watch an HO scale model train speed around the track.

And, they found that a well-told story can be as “hands-on” as a demonstration by a craftsman.

Stories stretch the imagination and Charlene McMahon and Suzanne Sikes did a lof of stretching.

But the stories the museum volunteers shared peaked their interest.

“I was showing them the well and telling them how water was drawn and one little boy said he wouldn’t go to all that trouble – he would just go to the faucet,” McMahon said, laughing. “Children don’t understand there was no faucet.”

The children were “bumfuzzled” that there was no indoor plumbing and the bathroom was outside.

“When they found out that you could slide a pot under the bed, they quit asking questions,” McMahon said, laughing. “It’s good for children to learn how life used to be. They won’t understand how difficult it was to do the things we now do with so much ease. But they’ll know that life was very different from what it is today.”

Meghann Harris, a teacher at Covenant Christian School, said her students have been studying about the early settlers and Pioneer Day will help them better understand what they are learning from their books.

“Pioneer Day will generate more interest among the students in those who settled our area and what their lives were like,” Harris said.

Pioneer Days continue from 9 a.m. until 5 p.m. today at the Pioneer Museum of Alabama.

In addition to the demonstrators and re-enactors, Bruce Brennan’s Wild West Show will be featured entertainment along with SheBANG! Cloggers and wagon rides around the museum grounds.

Admission is $6. Children ages five and under are admitted free. 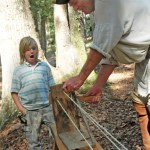 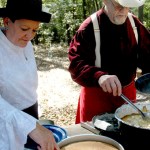 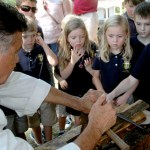 MESSENGER PHOTO/ JAINE TREADWELL Students from Covenant Christian School in Troy participated in Pioneer Day at the Pioneer Museum of Alabama Friday. Carter Stroud learned to use a drawing knife. 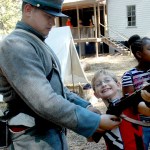