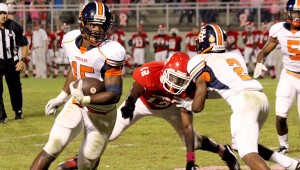 CHHS senior Richard McBryde runs the ball for a big gain in the first half against Eufaula.
MESSENGER PHOTO/DAN SMITH

EUFAULA – The Trojans of Charles Henderson High reeled off their fourth consecutive win with a big 42-14 victory over the Eufaula Tigers for a huge Class 5A, Region 2 win on the road Thursday night.

The Trojans jumped on the Tigers on their first possession in only two plays as Jalante Smith returned the opening kickoff to the Eufaula 42, a penalty against the Tigers moved the ball to the 39, and on the next play Austin Ingram hit Mondaris Dixon for a touchdown down the left sideline, and Ben Salmon’s extra point was good for a 7-0 CHHS lead only 27 seconds into the first quar-ter.

Eufaula fumbled on their first possession, with junior Coby Smith recovering for the Trojans.

Ingram then completed three big passes on the next drive, as the Trojans moved 61 yards on nine plays. Ingram connected with sophomore receiver Kobe Griffin for a 17-yard strike and Salmon’s extra point was good for the 14-0 lead with 6:24 remaining in the first quarter.

The Trojans scored for the third time in as many possessions marching 39 yards in eight plays, with Dixon breaking a 13-yard run for the touchdown. The extra point was no good, and CHHS led 20-0 with 11:54 to play in the first half.

Eufaula mounted a scoring drive on their next possession, as running back Jay Johnson busted a 39-yard touchdown run, and the extra point by Thomas Espy was good and the CHHS lead was 20-7 with 10:21 remaining in the half.

Dixon and Ingram marched the Trojans down the field on their next series, twice converting on third down, with senior linebacker Richard McBryde taking the snap in the wildcat formation and bulling his way in on third-and-goal from the one for the touchdown.

The Trojans went for two and Ingram connected with senior receiver Reilly Fox for the conver-sion, and a 28-7 lead with 5:36 left to play in the first half.

Eufaula took the kickoff to open the second half but fumbled on their first play from scrimmage, and the Trojans recovered at the Tiger 18. CHHS later attempted a field goal, but Eufaula was charged with a personal foul on the play, and with first-and-goal, Ingram hit Smith with a touch-down pass in the left corner of the end zone and Salmon’s PAT was good for the 35-7 lead with 9:36 to play in the third quarter.

The defense for CHHS produced points on the next Eufaula possession, as the Tigers moved the ball to their own 44, but a Eufaula fumble was scooped up by Lorenzo Pennington, who raced down the Eufaula sideline 44 yards for the TD.

Salmon’s extra point was good and CHHS led 42-7 with 6:23 left in the third quarter.

Eufaula scored in the final seconds of the game on a Torry Terry 5-yard touchdown catch from quarterback Justin Warren with :04 remaining, and the extra point by Chase Haney was good for the 42-14 final.

Ingram was strong in passing with a 10-for-17 performance for 135 yards passing and three passing TD’s, completing 9-of-11 passes in the first half.

Dixon rushed for 104 yards on 26 carries, scoring one TD on the ground and one receiving. He also led the Trojans in receiving with 58 yards for 162 total yards of offense.

The Trojans were balanced on offense with 134 yards rushing and 135 yards gained in passing.

CHHS never punted on the evening.

Head Coach Brad McCoy was very pleased with the performance on the road, for the Class 5A, Region 2 victory.

“It starts at the line of scrimmage, and Austin put the ball on the money, as good as I’ve ever seen,” said McCoy. “It was fun to watch. It was exactly what we wanted to accomplish, on the road on television on a Thursday night. All of it was great for our kids, and our program. It was a fun football game.”

CHHS improved to 5-2 on the season, 3-1 in the region, and looks to host Rehobeth next Friday night in Troy’s Veterans Memorial Stadium.