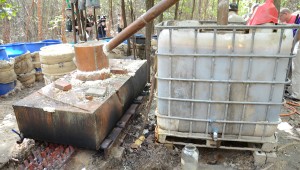 An illegal moonshine production has been busted this morning in the wooded area near Gardner Bassett Road.

The bust was conducted through investigative efforts by the Department of Conservation, and the Pike County Sheriff Department with the assistance of the Alabama Alcoholic Beverage Control Board, according to Sheriff Russell Thomas.

Thomas said 20 barrels were found, each of which produces approximately 7 gallons of finished products, totaling roughly between 140 and 150 gallons of illegal alcoholic beverage.

“What we have here is a total disregard for the law,” Thomas said. “They know what to do and they know how to do it.”

The moonshine was in the fermenting stage, around two days in with some further along according to its temperature, said the state police moonshine task force.

Some of the moonshine barrels were insulated, meaning that the producer started when the temperature was still low, then it got warmer, said the task force officer.

According to Thomas, illegal moonshine making creates a good margin between production cost and selling price. The producers did not pay any tax for the moonshine and had a decent size still that could run several times.

The task force estimated the equipment and materials to make the moonshine around $2,000. The copper still is worth between $700 and $1,200.

It costs around $8 per gallon for the sugar and wheat to make the moonshine. The selling price is around $25 a gallon if sold in bulk, or $40 for retail price.

Thomas said illegal moonshine production is very dangerous because the still is run with propane. If there is a leak in the old cooper still, there is likely to be an explosion. Moreover, there is no safety or health inspection for such alcoholic beverage.

The authority destroyed the barrels and took apart the still. Further investigation will be conducted.

According to Thomas, the last moonshine still they busted is on loan to the Pioneer Museum. This one will be loaned to the We Piddle Around Theater in Brundidge.