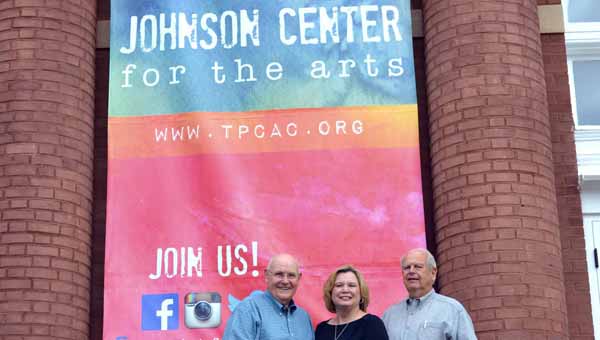 The “New Decade of Vision” membership drive for the Johnson Center for the Arts has set a new record at $41,285, which almost doubled the amount raised in the 2013 membership drive.

“That is more than we have ever raised in a membership drive and I believe this is a “New Decade of Vision” for the Johnson Center and the Troy and Pike County communities,” said Vicki Pritchett, Center director.

The membership drive was supported with a $10,000 match by an anonymous patron of the arts.

“We were told that, if the membership drive raised $10,000, the patron would match that amount,” Pritchett said. “The membership drive reached the $10,000 mark and the contributions kept coming in and that’s an indication the people of Troy and Pike Country realize how important the arts are to our community. The arts enhance the quality of life for all of us and make our community more attractive for economic development.

“But just as important is that memberships allow the Johnson Center for the Arts to continue to offer free admission to all of our events as well as supporting our operating costs.”

Pritchett said there are different levels of membership ranging from an individual membership at $30 to the platinum level, which begins at $5,000.

“We had one platinum membership; two gold memberships, which are $2,500; and three silver memberships at $1,000. We had many $500 memberships. But, every membership was equally important in its support of the Johnson Center and the arts in Pike County. We appreciate all 168 members and thank them all.”

Earl Ellis, membership committee chair, said the memberships came from all segments of the community, which is an indication that people from all walks of life are recognizing the importance of the arts in the community.

“My grandchildren spent about two hours at the Johnson Center looking at the Don Stewart exhibit,” he said. “They were fascinated by the little pictures within the big pictures. The Johnson Center is for everyone and memberships make it possible to have art experiences available at no charge.”

Ellis expressed appreciation to the patrons of Johnson Center for their support of the arts and of the community.

Mack Gibson, chairman of the Troy-Pike Cultural Arts Center board of directors, said the people of Pike County realize the importance of having an arts center in their community and that is the reason for the outstanding success of the “New Decade of Vision” membership drive.

“People are realizing what it means, culturally and economically, to have an art center in an area that has never had one before,” Gibson said. “So many people have been working for 12 years for Troy to be an arts destination and it has happened. The arts are now a part of our lives and they are not going away.”

Gibson said that, since day one, his goal was to have an art center that would be free and available to everyone.

“We have that in the Johnson Center where we are able to reach out to more people than ever before and to more areas,” he said. “The Johnson Center is not just a place to hang pictures on the wall. It’s a multi-purpose facility where we offer exhibitions and events that broaden the horizons of adults and children. I am so excited about what can be accomplished through the arts for our children and our university students. For everyone.”

Gibson said, for a small county, Pike County has much to offer in the arts.

“We have two museums that started from scratch, the Johnson Center and the Pioneer Museum of Alabama,” Gibson said. “Brundidge has the We Piddle Around Theater and its folk life play and storytelling events and studio 116 which is an art gallery and performance center. The Troy Arts Council offers a variety of performing arts throughout the year and, of course, Troy University is a strong supporter of the arts. Pike County is a bonafide art center and on the radar for tourism.”

When, the Alabama State Council on the Arts chose Troy for its quarterly meeting in September, Gibson said that was an indication that Troy and Pike County are recognized statewide for their contributions to the arts.

“What Al Head, ASCA director, and the state art council are doing in promoting the arts in Alabama is tremendous,” Gibson said. “And, if ASCA develops an art trail in Alabama, I believe we’ll be on it.”