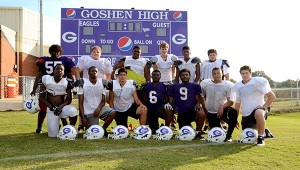 The outcome of Friday’s homecoming game could determine if the Goshen Eagles will be in the playoffs this season.

The Eagles are 4-2 for the season and 3-1 in the region, trailing on Elba. As they prepare to host Central–Hayneville on Friday, Damian Brundidge is among the players who have their sites set on the playoffs.

“It feels great to be a part of homecoming,” Brundidge said. “I’ve been a part of homecoming the last four years, and it’ll feel good to come out with the win. Getting the win on Friday will put us in the playoffs, so we’re just focusing on getting the win. We’re going to work hard the rest of the season, make it far in the playoffs and try and win a state championship.”

“They’ve done a good job,” Snyder said. “We asked of them to always leave something that would cause the younger group to challenge them and work a little harder. This group has done that with the work ethic they have done. They’ve been good leaders and shown that when you’re behind, you never quit. They showed that if you keep working harder and harder to show what you can do and to perform on that field good things can happen. We’re very proud of that.”

D’Errius Kite, running back for the Eagles, said his greatest memory from this past season was beating the Luverne Tigers 21-0.

“We went in there and upset them. Everyone thought we were going to lose,” he said.

Snyder said the team had been working hard to maintain high intensity during games as well as holding onto the football.

“We played a good quarter and a half of football last week then we started making a few mistakes and fumbling the football,” Snyder said. “That gave them an opportunity. Elba is a very good ball team, and so is Central. Their record may be a little different, but they are as athletic as anyone we will play. We will have to play very physical ball and just not make any of those mistakes we made last Friday against Elba. If we do that, we’ll be OK.”

Looking to the end of the football season, Terraninno Griffin said what he would miss most about playing with the Eagles would be the bonds he had made with his younger teammates.

“I’m going to miss all the young guys and being able to mess with them,” Griffin said. “They mess with me. We just have fun. I would tell them to play hard and always be positive. Don’t ever be scared.”

Snyder said the coaching staff had worked with the team to help them understand their game is the culmination of homecoming week. The Eagles hope to leave the home crowd with a “Fourth of July” finale Friday night, Snyder said.

“When you come in here on Monday, their interest is one way, but you get them to understand that their contribution to homecoming is a football game on Friday night,” Snyder said. “They’ve got all those things that come up, but the finale is what happens here on Friday night. The parade, all the stuff that goes on through homecoming week is just a build up to what happens on Friday night. It’s our responsibility for them to leave here like on the Fourth of July saying ‘ooo’ and ‘ahh.’ We don’t want it to be where we had a great beginning of the year and wonder what happened to the end of the year. We want it to be one of those where it’s been good the whole year.”

Kickoff between the Eagles and the Central-Hayneville Lions is slated for 7 p.m. in Eagle Stadium.