Keith Roling, tour organizer, said a wash of sadness came over him as he stood at the base of the Champion tree. 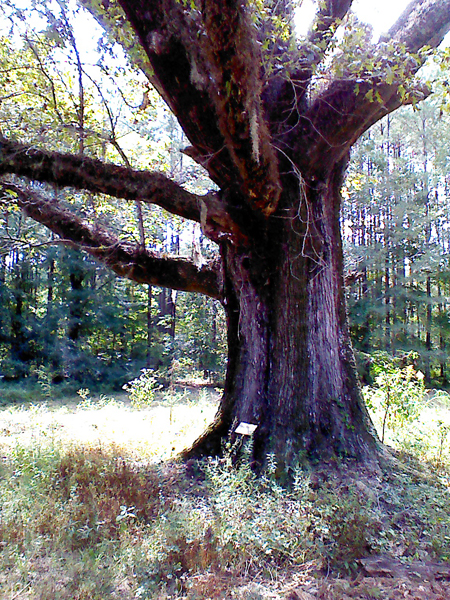 The storied Champion Red Oak Tree still stands a lofty 107 feet and its crown stretches a magnificent 133 feet but its foliage is thinning and its limbs are brittle.

Roling thought the 28 members of the tour would be able the join hands and circle the tree in hugging fashion but that was not to be.

“There were a lot of dead limbs and I was scared for us to get too close to the tree,” he said. “I was afraid one of the limbs might fall. It was disappointing to see the condition of the Champion tree. It probably won’t last many more years so I’m glad we included it on the tour. At least we got to see it and take photographs.”

There was nothing disappointing about the remainder of the tour for those with a connection to old Orion, which was founded in 1813, six years before Alabama was a state.

“Orion was originally known as Prospect Ridge,” Roling said. “It’s in the last of the foothills of the Appalachian Mountains. The name, Orion, means ‘mountain man’ and is defined in the constellation as the mighty hunter. Orion is visible from every inhabited place on earth. The stars on his belt align with the placement of the pyramids at Gaza and are said to represent the three crosses at Calvary.”

Orion was the home of Orion Institute, which was founded in 1848, and was one of the first schools of higher education in Alabama.

“Orion Institute was the center of education for this area,” Roling said. “Grades one through 12 offered Latin, music and math. Civil engineering, pre-law and medicine were taught at Orion Institute and many students left and attended the University of Alabama or finishing schools in Virginia.”

Roling said most of the buildings were built prior to 1840 in Greek Revival style.

“The Siler home was built by Solomon Siler on his plantation of more than 12,000 acres with about 300 slaves,” he said. “By 1870 Orion was in decline and the leading families moved away.”

Perhaps, Orion’s main claim to fame is that of Clarence “Pine Top” Smith, a boogie-woogie style blues pianist, who was a native son. Smith was born in Orion in 1904. He received his nickname from his ability to climb trees. “The Pine Top’s Boogie” was one of the first blues songs and featured rhythmic breaks that were an essential ingredient of ragtime music.

Smith was a posthumous 1991 inductee of the Alabama Jazz Hall of Fame.