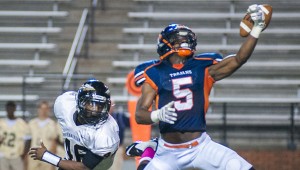 Charles Henderson cornerback Bryson Gandy tries to intercept the ball during CHHS’ recent game against Davidson. Defense will play a key role as the Trojans head to Eufaula on Thursday to take on the Tigers in an important Class 5A, Region 2 matchup.
MESSENGER PHOTO/FILE PHOTO

After facing a short week of practice and preparation, the Trojans of Charles Henderson High will take the road to Eufaula this Thursday night for an important Class 5A, Region 2 matchup.

The two teams play a rare Thursday evening contest as the game has been selected for television, and can be seen on WSFA’s “Bounce TV,” which is channel 102 on Troy Cablevision’s digital variety package or 12.2 on an off-air antenna.

Eufaula currently is unbeaten in the Region 2 standings with a 3-0 record and 4-2 overall, while the Trojans of CHHS are riding a three-game win streak and are 2-1 in Region 2 play and also 4-2 overall.

CHHS Head Coach Brad McCoy and the Trojans still have their sites set on winning the Regional 2 championship, but winning this game is vital in their quest to finish in the top two seeds for playoff pairings.

“Our first concern was playing on Thursday, as we had to adjust our schedule, so we basically lost our Monday practice,” McCoy said. “From a team and coaching standpoint, that is always a concern as you have to change things and adjust to things from what the kids are used to.

“Eufaula is a good football team, and we both are 4-2 overall, and they are 3-0 while we are 2-1 in the region. There is a lot riding on this game from the standpoint of Eufaula can still win the region according to how their game against Greenville plays out, and of course we are trying to find a way to get into that number two spot, and at minimum a chance to play at home if we can make the playoffs.

“So our kids understand there is a lot of importance to this game.”

Eufaula and CHHS have always been great competitors over the years, and Coach McCoy knows this season is no different.

“Eufaula and Troy have a big rivalry,” McCoy said. “It’s always a big game, always a close game. Coach (Daniel) Klages always has well-coached teams that are physical. They do things the right way, and they make very few mistakes. So we are going to have to play a very good football game to give ourselves a chance to win.”

The Trojans began the season at 1-2, but have reeled off three straight wins to sit at 4-2 entering this contest.

“I think going back three weeks ago, our first challenge to the kids was, we have got to get better at the line of scrimmage, the OL and the DL,” said McCoy. “That dated back to the summer. Secondly, our run game – from the running back position – we had to become a physical team, to offset our throwing game.

“I think our leadership has also gotten better the last three weeks. It’s been a positive experience of winning three in a row from the standpoint of after losing two in a row, so that has been big for our kids, so we needed that positive motivation.”

The Trojans have been led by Ingram in passing with 1,021 yards and 11 TD’s through six games, while Jalante Smitih has been the primary receiver with 30 receptions, 477 yards and seven TD’s.

Mondaris Dixon is the leading rusher with 580 yards through six games and also has seven TD’s, while Jared Wison has 126 yards on the season and Smith has 102.

Richard McBryde is the leading tackler with 74 on the year, 35 unassisted, Marquis Simmons is next with 49, Matthew Thomas has recorded 38 stops and Omari Vaughans 35.

Simmons also has three interceptions and has broken up four passes.

Kickoff is set for 7 p.m. this Thursday night at Eufaula’s Tiger Stadium.