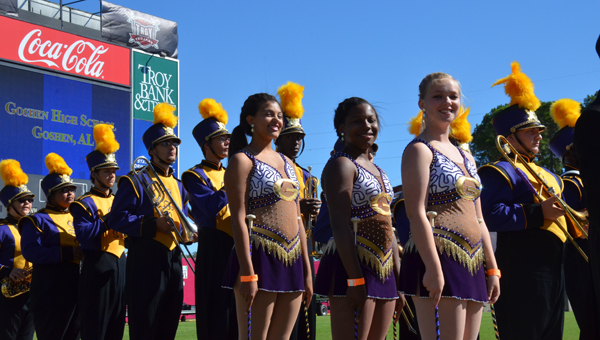 MESSENGER PHOTOS/ NGOC VO
Above, Goshen High School’s Pride of the Purple and Gold marching band get ready to go on the field for their performance. Goshen was among 40 schools that participated in the Southeastern States Marching Band Festival Saturday. 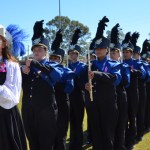 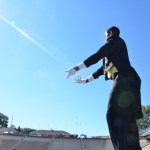 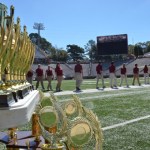 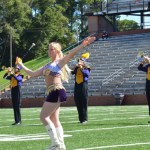 The festival was held at the Veterans Memorial Stadium, welcoming 40 high school bands across Alabama, Georgia and Florida.

The event received a great turn-out, according to Trent Burkett, CHHS Band Director, the festival’s Executive Director. He said the festival was the biggest one they ever held.

“The weather was great, the bands were great and everyone seemed to be enjoying themselves. We are expecting a good profit from the festival…Overall, I believe it was a huge success.”

A panel of judges evaluated the bands’ performances, Burkett said. However, the bands were not competing against each other. The performances received a rating of Superior, Excellent or Good.

“I really had a great time watching the bands perform and meeting all the new people,” said Zuri Lampley, a ninth-grade color guard member of the Blue Machine. “It was really cool and I can’t wait to do it again next year.”

“It was one of our best performances so far,” Walden said. “The students loved to see other groups perform different music, different shows. They learned that hard work pays off when they strive for their goals and believe in themselves.”

Burkett said the success of the festival is a cooperative effort from Festival Chairman Sherry Cardenas, Troy University, the City of Troy, Troy City Board of Education, and all the parents and volunteers.

According to Cardenas, the event received a lot of positive feedback from attending parents who were amazed by the hospitality at the festival.

“One of our biggest concerns was to make people feel that they are welcomed in our community and make them come back,” Cardenas said.

The festival took a respectful pause for the funeral procession of Demario Harris, according to Burkett.

“The entire festival stopped to honor this fine young man as his motorcade passed,” Burkett said. “Everyone stood and was completely silent. It was amazing to see such a display of respect for our student and his family.”