Legend: Blakeney steps down after 24 years 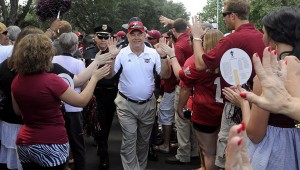 Troy University head coach Larry Blakeney discussed his plans to retire at the end of the 2014 season during a press conference Monday morning. Blakeney leaves a deep legacy at Troy, where he amassed 175 career wins prior to this season and moved the program to Division 1A.

That’s the number Trojan head coach Larry Blakeney wrote on the board for his players Sunday evening as he told the story of his 45 years coaching and informed his players that chapter of his life would soon come to close.

Blakeney announced his retirement at the end of the 2014 season. He has been a head coach for the Trojans for 24 years and has boasted 175 career wins and five Sun Belt Conference championships. However, the Trojans are 0-5 this season and Blakeney said the losses are weighing heavily on him as a coach.

“The wins are great,” said Blakeney during Monday’s press conference. “The losses are awful. It kills you. It wrenches your gut.”

Blakeney, who is a member of the inaugural class of the Troy University Sports Hall of Fame, boasts 175 career wins during tenure and five Sun Belt conference titles. Entering the 2014 season, his record at Troy was 175-104-1, posting the third best wining percentage among all programs in the state of Alabama during that timeframe. He guided the Trojans to 15 winning seasons, and stands fourth among all coaches to have manned a sideline in the state of Alabama, just one victory behind Shug Jordan.

A graduate of Gordo High School and Auburn University, Blakeney played quarterback at Auburn in the 1960s. He coached at Auburn before coming to Troy. He is a member of the Alabama Sports Hall of Fame, the Wiregrass Sports Hall of Fame and has been named Sun Belt Coach of the Year.

“You talk about the 175 wins, five Sunbelt titles, five bowl appearances,” Hartwell said. “Then you go back to during the 1AA days with seven of eight years in the playoffs. You can go on and on. The numbers don’t lie in terms of his success on the football field.”

And Hartwell said Blakeney has been just as successful off the field.

“If you look off the field, because really the business we’re in – the business of preparing young men and young women, our student athletes, for the game of life – you look at what he’s done in terms of developing those young men in the game of life and the success stories across all different walks of life. To me that is the number one thing Larry Blakeney has accomplished, and certainly we are very thankful for that.”

As news of Blakeney’s retirement spread, reaction from players and former players was visceral.

“It hit me pretty hard, a lot harder than a lot of the other players,” Troy native and freshman wide receiver John Johnson said following Monday’s press conference. “He’s done a lot for me since I’ve been here. Even when I wanted to quit on myself, he just kind of sat me down and told me how much he needed me and how much the team needs me and how much he loves me. A lot of things he’s taught me have helped me grow up a lot as a man.”

Senior linebacker Mark Wilson called Blakeney a “players’ coach,” saying Blakeney was always willing to reach out to his players in their times of needs.

“He’s one of those guys you can just go in his office, sit down,” Wilson said. “I know when my mom passed away, he called me every day of that week. He was there for me. He was there for me really more than anyone was for moral support. I’ve always been able to talk to him about anything, I feel like he is a great players’ coach. His door is always open.”

“His knowledge of the game of football is unparalleled,” Mizell said. “He put you in a position to win. Football is a team sport, but he put us in position to win football games. If we would do what he asked and do it in the way he coached us we could be very successful. When it comes to talking x’s and o’s with somebody, he’s as good as anybody.”

“He was able to adjust as far as coaching strategies and understanding the flow of the game and making critical decisions,” Williams said.

“He was excellent at that. You don’t coach somewhere for 24 years without being able to understand the landscaping changing. He’s one of the very few people that has had the success over all.”

Williams had the chance to work with Blakeney for almost 14 years, three years as an athletic directory with the university and 11 spent coaching with Blakeney.

“We were always teammates together,” Williams said. “He didn’t work for me, and when I worked for him it wasn’t like he bossed me. We always had great communication back and forth. We were in it together. That’s the same thing you try and get your players to do is work as a team … I’m just thankful to have had the opportunity to work with him and wish him well in his next endeavors. He’s a great man.”

Under Blakeney’s coaching tenure, the Trojans program saw a jump from a Division 2 program to a Division 1A program.

Mike Amos, who hosts local sports shows and works with the alumni affairs department at Troy, said Blakeney had been a great addition to the university’s program.

Amos said the decision Blakeney made to announce his retirement when he did followed Blakeney’s style.

“Of course, he was competitive even in Division 1,” Amos said. “We haven’t been very competitive lately, but we’ve still got to see pretty good football teams. Blakeney has the program’s best interests in mind. That’s why he did what he did.

“Not because he’s not a competitor and can’t win. I think he thinks this decision might motivate his players for the rest of the year.”

Blakeney said he hoped his decision would not adversely affect the team, which faces seven more games including several key conference matchups.

“I know our guys are going to work,” Blakeney said.