History will remember his name

There was a day when the press box of Veterans Memorial Stadium on the campus of Troy State University was a single-story structure atop the bleachers on the west side, and for that day and time it was good.

With all honor and respect to everyone involved, that’s just where Troy State University athletics once was, and times were also good. In the days of Division II sports, there were few better than Troy State, and they had the National Championship trophies in multiple sports to prove it. A dynamic athletic department led by Robert Earl Stewart saw to that.

The Gulf South Conference was great football in its day, and Troy had many fistfights with the likes of North Alabama, Jacksonville State and Mississippi College, to name a few, and more times than not was the last man standing.

Jack Hawkins, Jr., became Chancellor of Troy State University on Sept. 1 of 1989, and in December of 1990 Dr. Hawkins reached out to Larry Blakeney to take over a football program that had gone 4-6, 4-6 and 5-5 in three consecutive seasons. 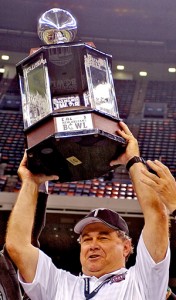 Blakeney was a big hire for a small school, bringing big-time college football experience to a small but proud football program in Troy.

The roadmap from there was laid out by Hawkins, Blakeney and others, and in a short time Troy State became Troy University, and moved from Division II to I-AA in 1991 to Division I-A in 2001.

Some of the familiar athletes to play under Blakeney include DeMarcus Ware, Osi Umenyiora, Leodis McKelvin, Lawrence Tynes, Jerrel Jernigan to name a few of some 90-plus men that have gone on to be drafted or sign as free agents in the NFL.

If you are going to be a big boy, then you better play with the big boys. Under Blakeney Troy University saw their name on the schedule against Nebraska, Miami, Mississippi State, Maryland, Arkansas, Missouri, Virginia, South Carolina, LSU, Georgia Tech, Florida, Oklahoma State, Ohio State, Clemson, Ole Miss, Navy and Duke.

Wins against Mississippi State, Missouri, Oklahoma State and Navy were proud moments in the Trojans history.

Entering this season Blakeney was seventh among active coaches in career victories in the nation and third in the history of the state of Alabama, behind Bear Bryant and Shug Jordan. He has already been named a member of the Troy University Sports Hall of Fame and the Alabama Sports Hall of Fame, and the home field has been named in his honor.

The Trojans’ run of five consecutive Sun Belt titles from 2006-10 was the best of times for Blakeney, but it will be his contributions from the day he arrived until the time he leaves that he should be remembered most.

Whomever is chosen to replace Blakeney is expected to not just pick up where he left off, but to advance the program further in the competitive waters of Division I football. Going backwards is not an option.

It is the dream of every true Trojan fan that one year, maybe just one year, that Troy will beat that Duke or Mississippi State or Georgia Tech team on the regular season schedule, run the table to go unbeaten in the Sun Belt, and win their bowl game to finish undefeated for the regular season and finish with a high ranking in the AP and Coaches Poll.

And then the next.

Didn’t Boise State and other smaller programs once have that dream?

Blakeney has done more for the Troy University football program, the university, and community than will ever be reflected on a won-lost record.

With that surge has come more jobs, more students, and more growth in our community. The population of Troy was once a solid 12,500 and today pushes 19,000.

Is football and athletics the reason? Not totally, but in some small part it has to be.

Yes, Troy is 0-5 in football this year, and not likely to run the table in the remaining Sun Belt games, but the foundation lain by Larry Blakeney is not measured in the won-lost record of 2014 or any number of years for that matter.

Who you see on the news at night and who you talk to face-to-face can be two different people, and more so than not is often the case.

If you have ever met or talked to Larry Blakeney, he will give you more than the time of day. He will give you his full, undivided attention, and make you feel you were worthy of a few minutes of his time. He remembers everyone’s name, and is genuinely glad to see you.

He and his wife Janice have been, and are, a great part of this community. The time Larry Blakeney, his wife and children have been in Troy has been our gain.

This may be the last season Larry Blakeney is the head coach of Troy University football, but his name should be remembered in the same respect and admiration as Riddle.

He has done more than put Troy University football on the map, he has taken it to a level it has never been.

Dan Smith is recreation director for Troy and a former sports editor for The Messenger.