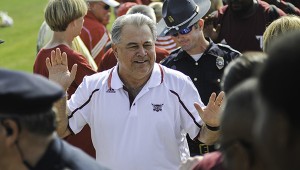 Blakeney said he wrote the number on the board for his players Sunday evening and told the story of his 45 years coaching, but also informed his athletes his time as a coach would soon be over with the close of the 2014 football season.

Blakeney has been a head coach for the Trojans for the last 24 years and boasts 175 career wins. The Trojans are currently winless for the 2014 season with a record of 0-5, and Blakeney said the losses were weighing heavily on him as a coach.

“The wins are great,” said Blakeney during Monday’s press conference. “The losses are awful. It kills you. It wrenches your gut.”

Blakeney stated his decision to retire had been in talks for roughly a week.

Although Blakeney’s announcement came not even halfway through the season, he maintained his thoughts that the players would continue to work hard for the remaining seven games.

“I know our guys are going to work,” Blakeney said.

Athletic Director John Hartwell also spoke on Blakeney’s involvement with the program and his decision to retire during Monday’s press conference.

“What he has done is far reaching,” Hartwell said.

Hartwell said the national search for Blakeney’s successor would begin immediately and the athletic director hoped to have Blakeney’s replacement by Dec. 1 but no later than Dec. 15.

“We’ll have an advisory committee,” Hartwell said. “It won’t be a search committee, but we will have an advisory committee for the position made up of a variety of folks including former players stretching across several decades, some local folks, folks who are familiar with our situation, and again we believe we are going to have, already have and will continue to have a tremendous interest in the job.”