When Troy Fire Chief Thomas Outlaw spoke at Captain Leo Cobb’s retirement ceremony, he presented Cobb’s ‘turnout’ helmet—the helmet that Cobb wore in the line of duty. It was covered in scratches, dings and scuffs.

“Those scratches are battle scars,” Cobb said. “I have a memory for each and every one of them.”

Cobb’s service to the Troy Fire Department was celebrated Fri. Sept. 26 at a retirement reception at Fire Station 2. Co-workers past and present came to reflect on the Captain’s forty years at the department.

Cobb said that the relationships he made during his time at the fire department are like a brotherhood.

“We work 24 hours shifts, prepare meals together, spend the night at the station,” Cobb said. “We are more like family than coworkers.” 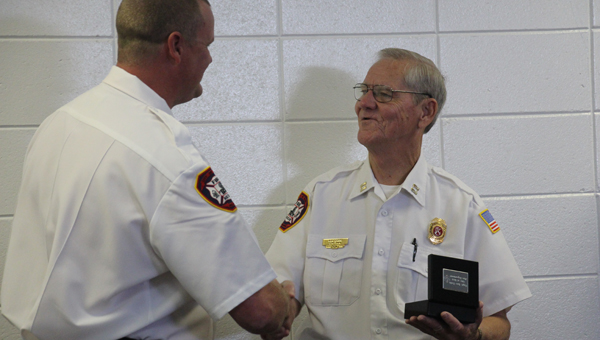 Retired Sergant Willie Henderson spoke in front of the audience of friends and co-workers at the reception. He said it was a pleasure to work with Cobb and that he wished him well in retirement.

“Leo is a nice comical guy,” Henderson said. “He kept us laughing all the time.” We were together 25 years, the longest shift together. I’ve never seen him angry in those 25 years. From the bottom of my heart, I wish you a good life.”

Cobb began his career at the Troy Fire Department in 1974 and made lieutenant the following year. Cobb transitioned from Lieutenant to Captain on September 30, 2004. At the time, there was no Sergeant position.

Mayor Jason Reeves and City Councilman Charlie Dunn were among the officials present to thank Cobb for his service to the city and wish him well in his retirement.

“I want let you know that I wish you well and appreciate you and all people in this room and the fine jobs you have done to keep us safe,” Dunn said. “Somebody has to do it and it’s not always easy.”

Cobb said he plans to travel during his retirement, including a trip to Savannah, Ga with his wife.