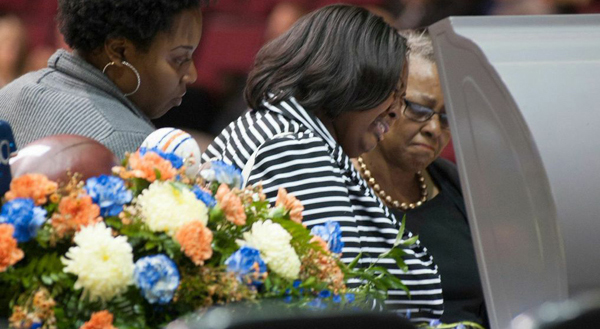 Messenger photo/Joey Meredith
Mourners pause at the casket during a viewing prior to the funeral service for DeMario Harris Jr. on Saturday.

“If you want to be remembered, carve your name on somebody’s heart.”

That was the message delivered by Superintendent Fisher Cook to the hundreds of classmates, teammates and family members gathered to celebrate the life of DeMario Harris Jr.

Harris, 17, died Sept. 27, 2014, just two days after collapsing on the field during a CHHS football game. Known as Squirrel to his classmates and teammates, he was a standout cornerback for the Trojans and had drawn the attention of several college recruiting programs.

At 2 p.m. on Saturday, some 16 hours after winning a shutout game against Sidney Lanier on that same field at Veterans Memorial Stadium, his teammates were among the solemn mourners who filed solemnly into Sartain Hall at Troy University.

McCoy was one of several speakers who offered insight into the many ways Harris had “carved his name” on the hearts of his school and the community.

“He loved … and he loved hard, no matter the cost,” said Dr. Boyd English, principal at Charles Henderson High School. “He was wise beyond his years.”

That depth of love was one of two virtues that set Harris apart, English said. “One was that smile … that legendary smile that will be in our memories for a lifetime.”

Mike Dean, former CHHS head coach, described Harris as phenomenal, both in life and in the legacy his life will leave. “Look around this room, look at all these people who’ve been brought together … only phenomenal people can bring so many people together at one time.”

And Troy City Schools Superintendent Dr. Lee Hicks choked up as he spoke to the family. “As long as CHHS is standing, we will do everything we can to honor his memory.”

Harris’ death has prompted an outpouring of emotion and support from the community. The CHHS Athletic Foundation sold t-shirts to honor “Squirrel” and to raise funds to help offset funeral costs for the family. More than 3,000 t-shirts were sold, and the stands during Friday’s game were awash in orange. Area schools paid tribute on Friday night, painting their 10-yard-lines orange and blue and affixing No. 10 stickers to their helmets. Memorials and support have come from across the Wiregrass, state and even the nation.

“As much attention as has been brought to his death, and there’s been a lot, what we’ve found is the outpouring of the community on his family is in direct proportion to the way he lived his life,” said Troy Mayor Jason Reeves. “He gave it all to his family, he gave it all on the field and he gave it all in the classroom …

“As long as I’m mayor of Troy Alabama, we will remember the spirit of DeMario Harris Jr.”