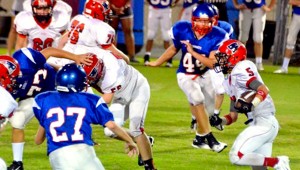 Reed Johnson carries the ball for the Patriots against the Macon East Knights. Johnson scored the first touchdown of the game for the Patriots. The Patriots JV team beat the Knights 21-0 Tuesday evening.
SUBMITTED PHOTO

The Pike Liberal Arts JV Patriots traveled to Cecil this week to face the Macon East Knights and beat the Knights in a 21-0 shutout.

Spencer Floyd led the team defensively with seven tackles. Max Copeland was close behind Floyd with five tackles. Wood Jinright and Tristen Carter each had three tackles for the defense. Head coach for the JV Patriots Wes Allen said the defense played well during their game against the Knights.

“The defense played well,” Allen said. “They flew to the ball, created a couple of turnovers and just played well. They were real aggressive. We made a couple of mistake, but overall they did really, really well.”

Allen said the Patriots were able to put in some second-string players during the fourth quarter, and they were able to hold the Knights at a goal line stand to cause a turnover on downs. “They were on the goal line about to score and our kids were able to preserve the shut out,” Allen said. “They iced the game on three offensive plays as time experienced. Everyone was real workman like. They did a lot of good things. I’m proud of them. I’ve been talking to them every week about getting better and they seem to be doing that. They’re responding well.”

The Patriots will travel to Hope Hull to face the Hooper Academy Colts, and Allen said the team is prepared.

“The kids are prepared,” Allen said. “It’s another road game, fourth in a row. This game is about what we control every game and our execution. If we can execute and run the ball stop the run and be the plus in the give away/take away column, we’ll do fine.”