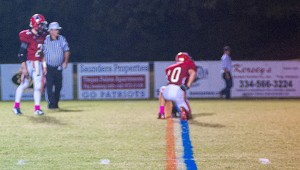 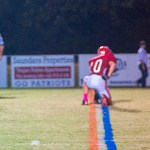 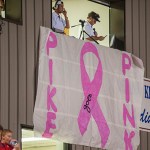 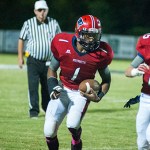 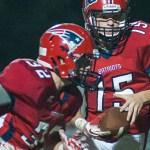 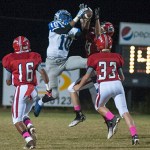 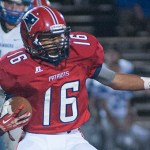 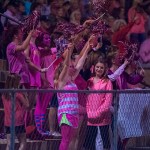 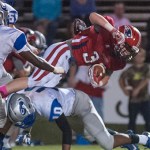 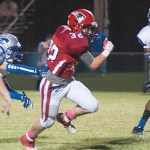 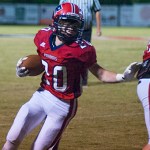 After a slow start and a called back touchdown, the Pike Liberal Arts Patriots went on to beat the Chambers Rebels 42-12.

“We knew chambers was going to be a quality opponent,” said head coach Gene Allen said. “We came out and they stuck it to us pretty early, but we adjusted pretty well after that first drive. Defense I thought they played pretty well, and offensively we made a few adjustments and got it going.”

Going into the game, Allen hoped the Patriots would not fall for the altered snap counts from the Rebels.

“We worked on that hard, and I think we jumped offsides once maybe late in the game,” Allen said. “I was pleased with the way we handled that, because it did hurt them a couple of times because it made them move and do some things they didn’t want to do.”

Rush Hixon, the quarterback for the Patriots Friday, had his first real start with Drew Starling injured. Hixon had a 10-yard run for a touchdown late in the second quarter that was ultimately called back due to a holding call. Hixon was able to redeem himself late in the third quarter with 6-yard touchdown run. Hixon said he was just thankful he was able to compete with high intensity Friday.

“I’m just blessed to be able to come back and throw,” Hixon said. “I was held from doing that since I had arm surgery this summer. It was a great feeling because any time you score a touchdown it’s a great feeling. We were at such a high at that point, and it got called back. We went back down to a low. Keeping the momentum from the first touchdown really helped us, but it was a team thing.”

“On the first one, I was just reading the play,” Hussey said. “I looked over and the ball was flying this way, so I just ran down and chased it down. On that second one, I was on a blitz and I came around and the ball just popped out of his jersey like a bar of soap. I just fell on it.”

JaMichael Jones had two 60-yard plus runs that both led to touchdowns. Jones said he wouldn’t have been able to play that way Friday without his linemen.

“I couldn’t do it without my line,” Jones said. “We had good blocks. I was just able to go. It’s a very thrilling feeling, a lot of momentum. It feels great.”

With playoffs in their site, Jones said it was a good feeling to come off of two wins before facing Autauga for a region game next week.

“We’re going to go into practice Monday and go hard all week,” Jones.

“We’ll practice and condition well and get our minds right. We’ll be ready for Friday.”

The Patriots will host the Autauga Generals in a region game Friday, Oct. 10 with kickoff slated for 7 p.m. in Delaney Kervin Stadium.