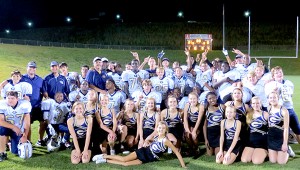 The Goshen JV Eagles finished their season 6-0 after defeating the Elba Tigers 21-8 this week. Several of the JV players will take the field again on Friday when Goshen varsity plays hosts to Elba.
SUBMITTED PHOTO

The Goshen JV Eagles traveled to Elba Tuesday night and beat the Elba Tigers 21-8 to finish the season undefeated with a record of 6-0.

Head coach Marshall McGlaun said the team did not necessarily have any break-out players, but instead the team played well together. “It was really cliché, but it was a team effort. We protected the ball well. We ran the ball well. Everything just well for us,” he said.

Caleb Dawson scored the first touchdown of the game with a 60-yard run on the first play of the game. Brock Snyder threw a 20-yard touchdown pass to Khristian Andrews. The last score of the game was from Snyder down on the goal line with a run up the middle in the third quarter. McGlaun said the team had a tough week, but they had pulled together.

“It’s been a tough week,” McGlaun said. “We’ve had a few kids not be able to play this week from other situations going on. I was proud of the way the kids pulled together. We played the entire game with a back up center. They all did well.

The JV game against Elba was the last of the season for the JV Bulldogs, and McGlaun said he had really seen his team grow over the last six games. “I think after a few weeks when they saw how successful they could be they just took off,” McGlaun said. “I tell them when it comes to success, you never arrive. Success is not something that you just finally get to. It’s something you constantly work at and constantly chip away at.”