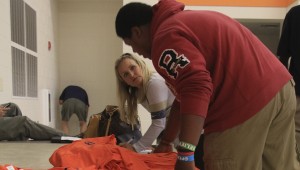 Joy Scarbrough and dozens of volunteers sorted and distributed thousands of t-shirts on Thursday as part of the Charles Henderson Athletic Foundation’s efforts to pay tribute to DeMario Harris Jr.
STAFF REPORTS 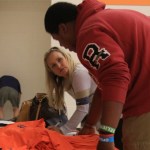 Joy Scarbrough and dozens of volunteers sorted and distributed thousands of t-shirts on Thursday as part of the Charles Henderson Athletic Foundation’s efforts to pay tribute to DeMario Harris Jr. STAFF REPORTS 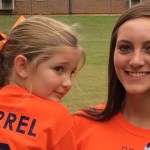 Kate Reeves and Lacey Stallworth model the shirts, which include a tribute to the player known to most as “Squirrel.”

The Charles Henderson High School cafeteria was awash in a sea of orange on Thursday as hundreds of people lined up for #flyhigh10 t-shirts.

More than 3,000 t-shirts honoring Demario Harris Jr., the senior football player who died after collapsing on the field during a game last week, have been ordered this week as part of a fund-raising and memorial effort of the Charles Henderson Athletic Foundation.

“It has been absolutely the most overwhelming support I’ve ever seen,” said Joy Scarbrough, who spearheaded the foundation’s efforts. “I honestly thought Sunday and Monday I’d order about 500 shirts and sell them at the game this week.

“When we announced it, we sold 500 shirts within the first hour.”

And the orders kept coming in – nearly 3,000 as of Thursday.

“We’ve had shirts ordered from five different states, as far away as Michigan,” Scarbrough said. “Locally, businesses like Troy Regional Medical Center have ordered shirts for their employees, and at Sikorsky, where Mr. Harris works, employees have ordered more than 300 shirts.”

The $10 t-shirts are bright orange and emblazoned with the “#flyhigh10” hashtag on the front and Harris’ nickname, Squirrel, on the back with the number 10.

They were printed by Deep South Apparel, a company owned by CHHS alums Pete Van Horn and Devin Miller. “I know for a fact they have pulled three all-nighters since Monday,” Scarbrough. “But that’s what they wanted to do to help make this happen because they are a part of the community, too.”

Van Horn, who was a member of the 2004 state championship baseball team at CHHS, was at the game on Friday when Harris collapsed. “They know what this has been like for our community,” Scarbrough said.

Harris’ death has rocked the community and, in many ways, revealed a depth and breadth of unity that surprised many.

“You always try to look for something good and he has really bridged so many gaps between people and schools,” said Misty Curtis, a TES teacher and parent. “Even people we think of as rivals have reached out and are showing support.”

Banners from area schools paying tribute to Squirrel hang in the CHHS cafeteria. At Pike Liberal Arts School, students raised more than $900 to support the family, and the PLAS foundation pledged to match that. The fields at Pike Lib and Pike County High will sport orange and blue stripes on the 10-yard lines tonight, a silent tribute to Harris.

And local photographer Tonya Gibson coordinated the creation of more than 600 tribute buttons, which were distributed to family, football players and students.

“Everybody loved him,” said Mary Bland, a family friend whose son, Alex, is a junior football player. “You could just hear it in the stands every game: ‘go Squirrel, go!’” she said.

The CHAF foundation purchased shirts for the football team, coaches and Harris family members. Students who have received their T-shirts are to wear them during school on Friday, as CHHS will hold a Trojan Tribute balloon release (weather-permitting) at 10 a.m. The community is encouraged to wear the shirts to the home game against Sidney Lanier.

Profits from the sale of the shirt will be used to help offset the family’s expenses.