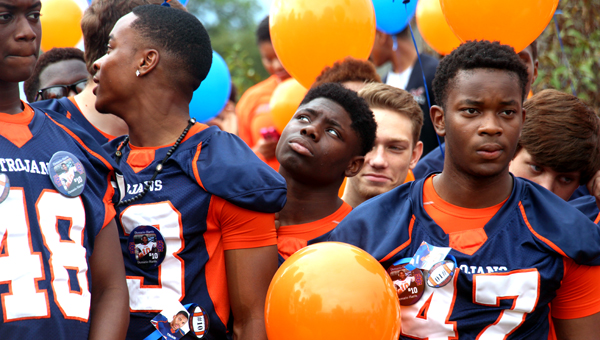 “Use him as an inspiration, not a tragedy.”

The words of Demario Harris Jr.’s father hung in the air as Charles Henderson High School students, staff and community members gathered to release balloons in honor of the fallen football player Friday morning at 10 a.m.

“I just want you all to keep in mind, the hard work, the dedication that my son had on and off the field,” Harris said. ” It’s the most wonderful thing as a parent to see —for your child to have an influence like this on his peers, his classmates, his teammates. I want him to inspire you. I want you to use this not as a tragic situation but to use it as inspiration.  Keep your head up, keep your praise up, support each other.”

Seven hundred orange and blue balloons were given out for the event. Students and staff wore the special commemorative t-shirts that were distributed Thursday. The injured CHHS football team member Jacquerean  Marshall gave the countdown to the balloon launch. Before the countdown, CHHS principal Dr. Boyd English spoke to Harris’s parents.

“The Harris family has grown— now you have 610 more daughters and sons,” English said. “We’re going to be here for you and with you every step of the way not only in the days to come and weeks to come, but the years to come. We are here for you in this time. ”

While tears and grief were present, members of the community and officials spoke on the positivity of this day, including Steve Savarese, executive director of the Alabama High School Athletic Association.

“As a parent and as a grandparent, the most tragic loss you can have is the loss of a child,” Savarese said. “Our thoughts and prayers are with the entire Harris family.”

Savarese said the outpouring of support reflects the impact Harris had on his community.

“It demonstrates to me the impact Demario had on this entire community and shows what a wonderful supportive family that the Troy community is, and when you have a tragedy like this, it’s family that gets you through. I am very confident being here today that the Troy family will enable the Harris family to get through this great loss.”

Directly before the balloon launch, English told his students to live their lives with the legacy Harris left behind.

“Let’s show our love every day with what we do and say,” English said. 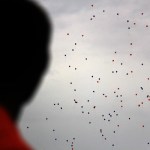 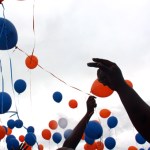 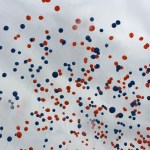 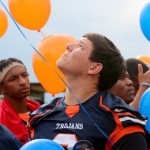 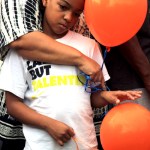 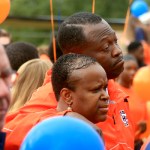 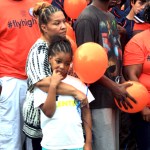 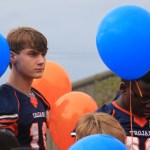 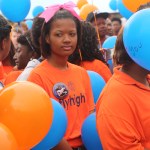 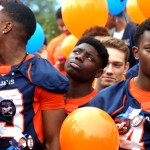 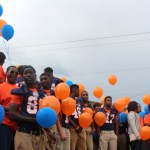