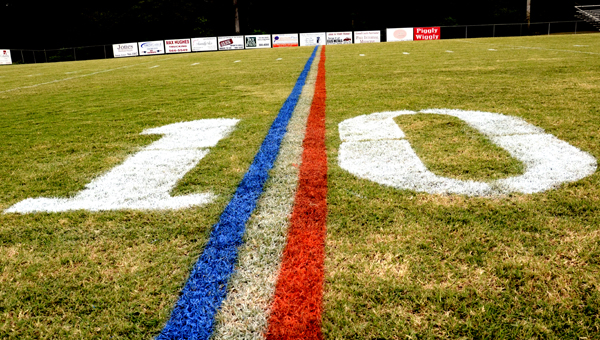 Football is more than a sport, more than a way a life, and more than a common thread that ties one person, one family, one school and one community to another.

Any rivalry that may have existed among local schools in previous years will be forgotten this Friday when Pike Liberal Arts, Pike County High and Charles Henderson High step onto their playing fields, as the show of support for Demario Harris will be seen at each stadium.

At Delaney Kervin Field on the campus of PLAS, and Bulldog Stadium in Brundidge, the 10-yard lines will be painted orange and blue, and players at each school will wear Harris’ No. 10 on their helmets in honor, in memory and respect.

Football is a brotherhood among players, a bond shared only by those who have played.

Football is a source of school and community pride among the fans and alumni, a feeling of belonging and support that rides on every game and every season.

One week after the Charles Henderson High senior cornerback was taken by ambulance from Troy’s Veterans Memorial Stadium after collapsing on the field, his teammates will return to the field for another football game.

Sidney Lanier is the next game on the schedule for CHHS, and while overall records and stats do not seem as important today, the season must continue, and Friday night will be the first step in a time of recovery and healing.

Harris, who passed away this past Sunday in a Dothan Hospital, will be laid to rest this upcoming Saturday, Oct. 4, with visitation in Troy’s Sartain Hall from 12:00-2 p.m. and the funeral beginning at 2 p.m.

For CHHS Head Coach Brad McCoy, the Trojans have found support not only from each other, but from across the state and nation.

“I don’t even know if words can express the thoughts from how many coaches, administrators, and from different people across the state have shown their support, not just Troy and the surrounding areas,” Coach McCoy said. “The outpouring of support and kindness, thoughts and prayers has been amazing. There have been coaches I have not talked to in a while. It’s times like this you realize what people mean to you, and how just coaches in general come together in times of adversity. It’s hard to explain. I have heard from so many different people.

“It also certainly helps to have the calibre of coaches that we have on this staff here. You kind of take it piece by piece. You segment your day to devote your thoughts to this, and then it takes just a second to think back to what has happened and what is going on. We do not have an exact script, You can be trying to work on something for the game then your mind goes right back to what has transpired, and you think about the family, and you think about Demario. It’s just a lot of different emotions.”

Coach McCoy said that even during this time of grieving and loss, his team still prepares for a Sidney Lanier of Montgomery football squad. The Poets come to Troy with a 1-4 record, while the Trojans are 3-2.

“It’s really hard to put into complete sentences, but I’ll say this,” McCoy said. “What we have tried to eliminate is idle time. We erred on the side of trying to get back to work for the kids sake and the coaches sake, just trying to stay as busy as we could, where we do not find ourselves thinking about everything that happened last Friday night. If you are not careful, it will consume you, just like it has with so many. But it is our job as coaches to try to help our players to deal with the grief and the pain of losing someone so close to all of us. It’s just hard. It’s just difficult. I think all the coaches and all the faculty and all the people in this school system have certainly made it a little bit easier every day.

“Like we told them back on Sunday, and as I told them, it’s not so much about the winning or the losing, its how we approach every day. That’s what is going to honor Demario the most. It’s not that we would not honor him if we could not pull out a win, but how did we prepare, how did we come to practice, what was our mindset? How much effort did we put into our team to be successful? That’s what Demario did for us.”

Coach McCoy said the example as a player, student-athlete and role model Demario Harris set for the team and his classmates is one that will always be a standard for all to attain.

“That’ s exactly what we as coaches, and we as players have said,” McCoy said. “If we can do what Demario did each and every day of his life, when he came to practice and to play, then I think we are doing the right thing by him and his family. I told them, don’t let this be determined by a win or a loss, but more about our approach than anything.

“Demario is the perfect example of why we get into coaching. As a dad, you want your son to be just like Squirrel. As a coach, it makes your job so much easier when you have players like him that are on your football team. As we move forward, I know our thoughts and prayers will continue to be with Demario’s family as they move forward, and we will always remember Squirrel. It will be something we live with, something we will always remember. I am just an extremely fortunate man to have been around him. He has made me a better coach, man, father and husband.”

Kickoff for Friday’s game is set for 7 p.m. in Troy’s Veterans Memorial Stadium.