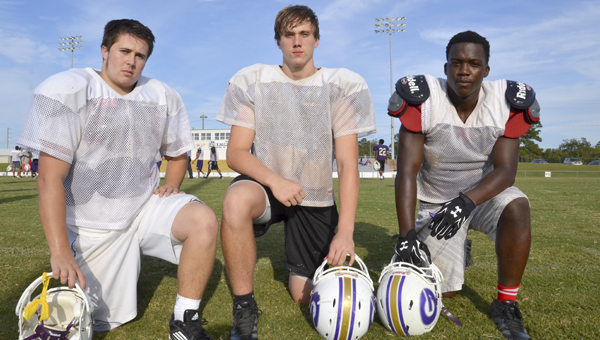 That’s the word of the week for Goshen head coach Bart Snyder as his team prepares to face an athletic, undefeated Elba Tigers team tonight.

The Goshen Eagles traveled to Dothan last week to face an athletic Houston Academy for homecoming and came home with a 13-6 win, but face a much more athletic, 5-0 Tigers in Elba.

“They’re a good ball team,” Snyder said. “They’re undefeated for a reason … They’re coached extremely well, and we’ve just got to match it.”

Snyder said the Raiders had been a very disciplined team during the contest and the Eagles had been working this week to be able to emulate the Raiders’ mistake-free style of football.

“They didn’t make any mistakes,” Snyder said. “We’ve really stressed to be disciplined. To play our football and be consistent on what we’re doing and cut out the mistakes. If we can do all that we’ve got a chance.”

Snyder says the Tigers are more experienced than the Eagles, who have a number of younger players this season.

“They’ve got key players that have been there for a while and playing the positions, so we’ve just got to do what we’re supposed to do,” Snyder said.

Senior Tyler Phillips has led the team in tackles the last few games for the Eagles. Phillips said with the progression of the season he had confidence in his team.

“I just try to do my position and do my assignment to help and rely on everyone else to make the plays,” Styron said. “We’ve worked on discipline and being where you’re supposed to be and just doing your job. We’ve gotten better. We’ve been working hard to get better. Each week we get progressively better.”

Terrainno Griffin, senior, had a 29-yard touchdown during the Eagles game against the Raiders. Griffin said he felt Styron, Phillips and he had been able to lead the team in different ways.

“Coach feels like the three of us can be leaders on offense and defense, on both sides of the ball,” Griffin said. “I think all the kids listen to us when we tell them to just be positive. I just tell them that we’re both football teams. We can win. Anything can happen. You’ve just got to play hard.”

Snyder said the key to facing Elba would be communication and executing on the different styles of play Elba will run.

“They’ll run that spread offense, and then they’ll go into a double wing, which is totally two different styles of offense. We just have to make sure we adjust to it, so we can hopefully be able to stop them.”

The came is slated to kickoff at 7 p.m. in Elba’s Tiger Stadium.