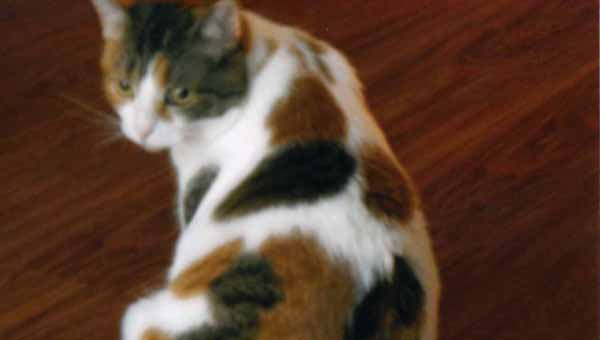 Cali the Cat is looking back to see who’s pushing her for the lead in the 2015 Pet Photo Contest. The contest ends at 5 p.m. today.

The Pet Photo Contest ends at 5:30 p.m. today so a large number of votes are expected to be cast before the final seconds tick off the clock.

Lisa Howard, chair of the Humane Society of Pike County’s Pet Photo Contest, said a former feline winner of prestigious pet has overtaken the matching pair of mules that led the contest much of the time.

“The mules, Pete and Jenny, were in the lead going into the weekend but Cali the Calico Cat breezed by the mules to claim the lead,” Howard said. “As of Monday afternoon, Cali was ahead by slightly more than 100 votes. That sounds like a rather comfortable lead but, you just never know how many are waiting until the last possible minute to cast their votes.”

Howard said that, in the past, a pet would seemingly have the contest won, only to falter on the home stretch.

“Cats have graced the covers of all put one Pet Photo Calendar,” she said. “This year, 2014, for the first time, some animal other than a cat won the contest. Ziggy, a fine canine, will always have the distinction of being the first dog to win the contest. And, cat owners said the “only” dog to win.”

Howard said, Pete and Jenny came out of nowhere to take and hold the lead in the 2015 Pet Photo Contest for a couple of weeks.

“This year is the only time an animal other than a cat or dog has challenged for the lead,” she said. “But the dog’s haven’t conceded yet. Daisy dog is nipping at the heels of the leaders and could make a run for the finish. And, you can’t count any contestants out. There are a lot of pet owners that would like for their dogs, cats and mules to be featured as Pets of the Month so I expect the voting to be rather furious for those 13 spots on the 2015 Pet Photo Calendar.”

Votes are $1 and may be cast until 5 p.m. today online at pikehumane.org or at The Little Framery, Troy Antiques or Guynn’s Income Tax and Bookkeeping Services in Troy or Hillside Antiques on Highway 231 South or Brundidge Florist in Brundidge.

All proceeds from the contest support the Humane Society of Pike County’s spay and neuter program.