‘He left it all on the field’ 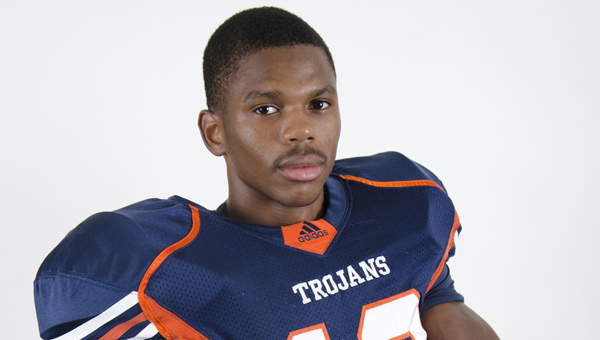 Family members say Demario Harris Jr. lived for the game of football and for his Charles Henderson Trojan teammates. The 17-year-old died this weekend after collapsing on the field during Friday night’s game against Davidson.
MESSENGER PHOTO/APRIL GARON

“He left it all on the field.”

“On Saturday my son … succumbed to the injuries he sustained Friday night,” the elder Harris said in a statement late Monday. “The pain we have endured the past several days has amounted to what feels like an eternity. While the conditions surrounding his passing are unimaginable and deeply painful, I want people to remember my son as he was: full of love, life, compassion and laughter. He was dedicated to his family, excelled in his school work and loved the game of football.”

Harris, 17, was a stand-out athlete on the Charles Henderson High School football team. The senior had played for the state championship runner-up team in 2013 and was being considered for athletic scholarships at several schools before he collapsed during Friday’s game against Davidson.

He earned the nickname “Squirrel” sometime in middle school, a moniker that hinted at his speed, energy and quickness.

“He was an energetic kid who worked his butt off,” said Hunter Kennedy, a 2014 graduate of CHHS who now plays for the UAB Blazers. “There was never a day he didn’t smile … and he was the first guy in the weight room and the last guy out. He wasn’t going to let anybody beat him at anything: running, weights, or even in the classroom.”

Former teammate and current Troy University Trojan, John Johnson spoke briefly Monday afternoon at the Trojans’ press conference and described the feeling of finding out a close teammate had passed as “devastation.”

“He was a brother to me,” Johnson said. “I spent four years of my life with him bleeding, sweating, crying. … That’s my brother. He was taken away from me so fast, so suddenly. It’s hard.”

To senior quarterback Austin Ingram, Harris was simply the best defensive back he’d ever seen.

“On the field, it doesn’t get any better than Squirrel was,” Ingram said. “He was a hard worker and gave 110 percent. … Off the field, he was such a great person. He always had a smile on his face. He was always willing to help someone out. He had a great attitude. He literally had the best attitude of anyone I ever met.”

That attitude resonated with head coach Brad McCoy, who described Harris as “the reason that we get into coaching.”

“When you think about why we coach, we coach young men to get better. We coach them to develop. We coach them to be strong people in the community and one day be good fathers and good husbands, and that’s the direction Demario was going,” McCoy said. “He just had his act together. He was good in the classroom. He was looked upon as a leader. He was popular. Everybody wanted to be around him.”

More important, McCoy said, Harris brought a positive attitude to all he did. “He just came to school everyday wanting to get better and he put a lot of pressure on himself to improve. But he always had a smile on his face.”

Classmates remember that smile and his infectious optimism. “He’s the kind of person that God calls us all to be,” said Allie Cooke. “There’s not literally anything bad that anyone could say about him, and that’s hard to say about kids in high school.”

Dr. Boyd English, principal, has described Harris as a true gentlemen and exception student. “He just had that smile that radiated the room,” English said. “He just had a terrific personality.”

English said students will pay tribute to Harris with a “Trojan Tribute at 10 for 10” on Friday. The event will include a balloon launch at 10 a.m. in front of the school.

“This is a tough loss, simply because of what an impact he has made on our campus,” English said. “But his love will continue to live on in everyone he touched.”

David Laliberte knew Harris well as a student, as an athlete and as a young man. The retired math teacher and longtime sports broadcaster had taught Harris and watched him develop on the field. “He was a gem of a guy,” Laliberte said. “He was like family to Jean and I.”

Several years ago, Laliberte was looking for help around his house. The former CHHS coach recommended Harris, and the pair formed a friendship over the years. “I can still see his smiling face,” Laliberte said. “When he was on the football field, he was a competitor. He was out there to win. But off the field? There was always a smile on his face.”

That smile is one of the most vivid memories of classmate Christina Edenfield. “Always smiling. He was just always smiling,” she said.

And it will be among the things his classmates miss the most, said Laura Dobson. “And if we could do one thing differently, I wish we could have let him know all this amazing things before he passed.”

Edenfield, Dobson and Cooke were among the students who helped organize a candlelight vigil on Saturday that was attended by more than 300 people, including students, parents and community members. “It was amazing to see so many people there who don’t even go to our school,” Edenfield said. “The support from everyone – parents, teachers, administrators, the community – has been amazing.”

The Harris family has felt that outpouring of support, as well. “On behalf of my family, we are truly grateful for the countless prayers and condolences we have received,” the elder Harris said in his statement. “The outpouring of support and affection from the community is a true testament to the life Demario lived. While the list is long, my family and I would be remiss if we did not take the opportunity to personally thank the mayor of Troy, Alabama, Mr. Jason Reeves; school superintendent Dr. Lee Hicks; the principal of Charles Henderson High School, Dr. Boyd English; my co-workers at Sikorsky Aircraft; the Courtyard Mariott; and the entire Charles Henderson High School faculty and student body. I also want to extend a special thank you to Dr. Law and staff for the care and affection you showed my son.”

“This loss has had a profound impact on my family and this community. The road to healing has an unforeseen path but I am confident that with God’s love and mercy, this too shall pass.”

Funeral services will be held at 2 p.m. Saturday in Sartain Hall at Troy University. Viewing will begin at noon.

And, the elder Harris said he wants everyone to remember a simple testament that embodies the spirit of his sone: “#leaveitonthefield.”

Editor’s note: A fund to assist the family has been established by the Charles Henderson Athletic Foundation. Donations can be mailed to CHAT, 103 Rick Street, Troy, Alabama, 36079, or brought to any Troy City Schools campus.