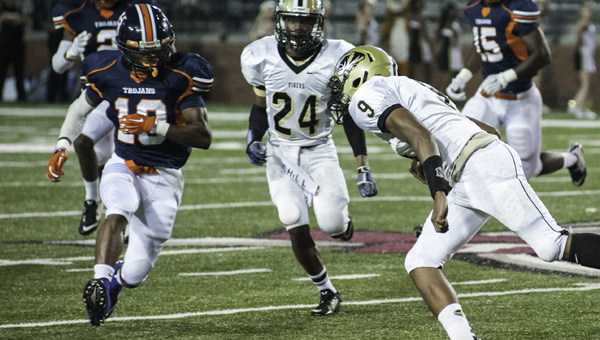 Family members say Demario Harris Jr. lived for the game of football and for his Charles Henderson Trojan teammates. The 17-year-old died this weekend after collapsing on the field during Friday night’s game against Davidson.
MESSENGER PHOTO/JOEY MEREDITH

“This morning, we went through a practice like we typically would on a Monday morning, and I thought the kids showed a lot of resilience. They showed a lot of positivity. I think they understand Demario would certainly want us to keep working and to keep pushing on and preparing for the next game. That’s what we’ve got to do, and that’s what the kids started doing this morning,” McCoy said.

Harris passed away this weekend, and the teammates have spent the weekend working through the emotion and pain of the loss. It’s the second tragedy to strike the Trojans this season, and one of several many of the players have faced. In August, teammate Jacuerean Marshall was shot in the face and is still recovering. In 2011, when this year’s seniors were freshmen, player Ronnell Moore died in a car accident and assistant coach Tyrone Black died during the season after suffering an apparent heart attack at his home.

Austin Ingram, senior quarterback for the CHHS Trojans said the team was getting better. “There was a lot of intensity and a lot of ‘want to’ today, but we know it’s not the same without him today. But we’re out there to get better.”

Friends and family gathered Saturday evening for a candlelight vigil for Harris, but McCoy said the team met briefly before the vigil where several seniors spoke challenging teammates to come together during this difficult time.

“ Austin Ingram, Richard McBryde and Marquis Simmons called a team meeting Saturday night and really just challenged their teammates to come together and do the right thing for Demario and to represent him and honor him in the right kind of way, which is to continue to improve and work hard,” McCoy said.

Ingram said the meeting Saturday was a way to “get the emotions out” for the team.

“The biggest thing for Saturday night was kind of getting the emotions out,” Ingram said. “Just letting them know we are all in this together. We don’t want any one person to feel any different or like they have to go through this alone.”

While the team met Monday morning for practice, McCoy said the real test would be as the week went on and the Trojans took the field once again Friday evening.

“The thing is, I think deep down we all feel like our guys are going to respond in the right kind of way,” McCoy said. “Of course, we won’t know until for example this Friday night when we strap them on again and we play the next football game … I want to say we started off the week in the right way, but it’s going to be told by the way we practice this afternoon and Tuesday and Wednesday.”

While Ingram said the season would now be changed for the CHHS Trojans following their loss, he said the team was allowing the loss of Harris to affect them in a positive way.

“It definitely does, but I think it affects us in a good way as well,” Ingram said. “It really shows us we need to have fun when we’re out there because you’re not guaranteed anything. That puts a better attitude in us and a ‘want to’ in us.”