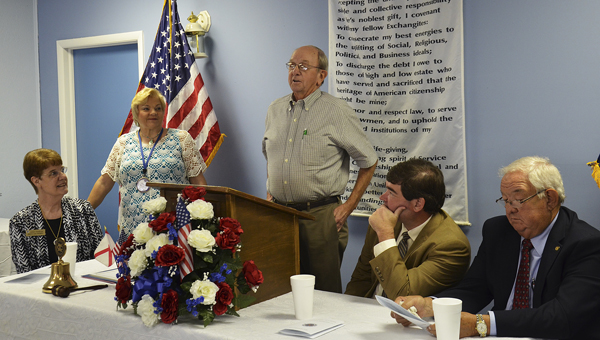 The Troy Exchange Club celebrated its 40 anniversary Thursday by renewing its covenant and honoring Club members with 25 years or more of service.

On behalf of the Troy City Council, Reeves presented a proclamation declaring the month of September Troy Exchange Club Month.

“In so doing, we honor the men and women who contribute so much to our community,” he said.

Donna McLaney, Club president, recognized Jack Rainey, who is the only charter member of the Club that is still an active member. Other members with 25 years or more of service to the Troy Exchange Club are Otis Stone, 34 years; Jerry Miller and Jerry Beckett, 26 years; and Larry Livingston, Jack Norton and Mac Holmes, 25 years.

McLaney expressed appreciation to the longtime members and to all members of the club who accepted the “divine privilege of single and collective responsibility as life’s noblest gift.”

“The Exchange Club is people helping people,” McLaney said. “We are America’s premier service club working to make our communities a better place to live.”

The Troy Exchange Club was originally chartered on September 21, 1974 with 50 members. Today, the Club has 48 members who are actively involved in the club’s events and activities. “As a Club, we sponsor a wide variety of activities, primarily focused around the Exchange Programs of Service,” McLaney said. “Improving communities, helping the disadvantaged and encouraging good American citizenship is what Exchange is all about.”

“Through the Americanism Program of Service, the Troy Exchange Club sponsors the One Nation Under God Prayer Breakfast, the Give a Kid a Flag to Wave program and provides Freedom Shrines to schools throughout the area,” she said. “The Freedom Shrine programs and dedications seek to instill a senses of patriotism in the youth of our nation as well as in all our citizens.”

Each Freedom Shrine is located in a public place where the general public can observe and study the documents that have been instrumental in creating and maintaining the freedoms Americans continue to enjoy, McLaney said.

“We established these clubs at Pike Liberal Arts School on January 31, 2013. Also, we were first in establishing the first Collegiate Club at a public university at Troy University on March 27, 2014.

“All Exchange members hold close to their hearts the four ‘pillars’ of Exchange – youth programs, community service, Americanism and our national project – the prevention of child abuse. Our motto is ‘Unity for Service.’” The National Exchange Club is made up of nearly 800 clubs with more than 25,000 members.

across the United States and Puerto Rico.