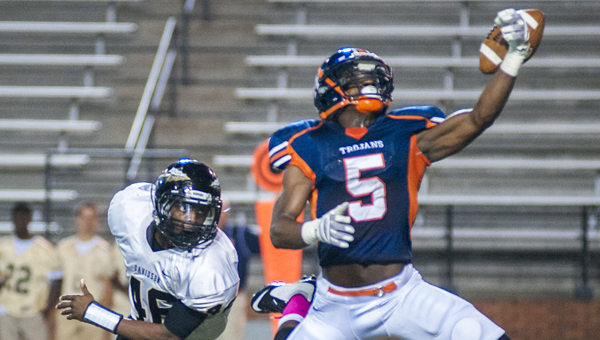 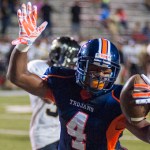 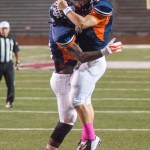 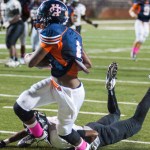 The Trojans of Charles Henderson High have to feel good about the direction their football team is heading following an important 38-21 victory over Class 7A Davidson of Mobile Friday evening in Troy’s Veteran’s Memorial Stadium, but their hearts and minds were also on the health and well-being of senior defensive back Demario Harris, who left the stadium by ambulance after a serious injury in the first half.

Harris, a senior defensive and special teams leader, was transported to Dothan for further tests, and according to initial reports Harris was believed to be unconscious when he left the stadium.

The Trojans played with passion and determination the entire game, especially in the absence of Harris.

Senior running back Mondaris Dixon led the Trojans on the night with 160 yards and three touchdowns, senior quarterback Austin Ingram connected on 8 of 17 passes for 69 yards and a TD, and senior Richard McBryde took a fake punt 43 yards for a touchdown in some of the many Trojan highlights.

It was Davidson scoring first on a 9-yard touchdown carry by senior running back David Reese, finishing off a five-play drive highlighted by a 49-yard pass play from quarterback J.Michael Riley to James Clemons.

The Warriors led 7-0 with 7:21 remaining in the first quarter, but the Trojans recovered a fumble at the Davidson 13, and two plays later Dixon took the ball around the right end, dove from some three yards out, and did a head over heels somersault for the TD when a defender clipped his feet as he flew towards the end zone.

CHHS went up 14-7 on their next possession when facing fourth-and-three the Trojans set up to punt, but blocking back Richard McBryde took the snap and bulled his way 43 yards for the touchdown, hurdling one would-be tackler and taking it in for the score.

Davidson moved the ball on their next series but Marquis Simmons picked off a pass giving them the ball at their own 47.

Two plays later Dixon sprinted 49 yards for the touchdown, and Salmon’s kick put the Trojans up 21-7 as the first quarter came to a close.

Davidson scored with 1:42 remaining in the half on a 15-yard pass from Marquese Manuel to James Clemons, cutting the lead to 21-14.

CHHS recovered another fumble midway of the third quarter at the Davidson 12 yard line, with Austin Ingram connecting with sophomore receiver Kobe Griffin for an 11-yard TD strike, and Salmon’s kick was true for the 28-14 advantage.

Davidson answered with a 10-play scoring drive, as Decklan Brooks went in from three-yards out to cut the CHHS lead to 28-21.

The Trojans then put together a 10-play scoring drive, with Salmon drilling a 40-yard field goal with 10:10 remaining in the game for the 31-21 lead.

Dixon added his third touchdown of the game with 2:48 remaining on a 5-yard carry, with Salmon’s kick giving CHHS a 38-21 advantage.

Davidson got the ball back but consecutive sacks by McBryde and Stephon Moore of Davidson’s quarterback Manuel stopped any late drive before it could get started.

“It is just a confidence builder each and every time we can go out and be successful, for all of these new players that we have got, and that’s what we need. We need that going into region play next week and it could not happen at a better time.”

McCoy felt the running game was key to the success of the outcome of Friday’s game, and he could not have been any more pleased.

“We have talked as a staff, and anyone in football understands it, that if you are able to run the football, it makes everything else so much easier,” McCoy said. “It makes play calling easier, it makes all the situations that much easier. We were able to convert on third down, and able to run it to set up nice throws. We took our shots and chances on special teams that ended up being big plays for us.

“Defensively I really liked the way we flew around the ball. We have talked two weeks about we have got to get better about getting 11 guys to the football. I was impressed with our defensive line controlling the line of scrimmage like we knew they had to for us to have a chance. My hat is off to them, I am very proud of these kids.”

CHHS returns home this upcoming Friday night against Sidney Lanier of Montgomery for the Trojans Homecoming.