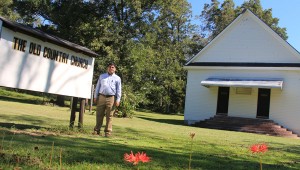 HAMILTON CROSSROADS – After 125 years of service, Hamilton Crossroads Church of Christ is celebrating its anniversary as a reunion of friends and family of the church Oct. 4 and 5.

The church also has upgraded its facility, Freeman said. The original church building was established in 1962 and is still serving Hamilton Crossroads members. A fellowship building and a gym were added in the late 1990s. Over the years, the church also acquired better equipment such as a state-of-the-arts sound system and PowerPoint projectors for ministers and speakers.

According to Freeman, the program for Hamilton Crossroads anniversary celebration includes Saturday get-together and fish fry dinner for church members at 5 p.m. Sunday school will start at 10 a.m., worship section at 11, followed by lunch.

“Homecoming at Hamilton to me simply means family, friends and delicious food,” said Chan Senn, a member of the church. “Those are the things I always cherish. Nothing has impacted my life more so than growing up in Hamilton Crossroads community.”

The main speaker for the church service will be former preacher Christ Barnett who is currently serving at Chattanooga, Tennessee.

Freeman said the church is expecting a great weekend with a bigger crowd than usual.

The event is designed for both the current congregation and former members who had moved away to other states coming back to celebrate with the church.

The anniversary has been in plan since January, Freeman said. Hamilton Crossroads tries to promote the event through its website and the church app to get the words out to everybody in plenty of time.

According to Freeman, Hamilton Crossroads church is well established among people in the community with its efforts to give back through civic service.

The church benevolent food and clothes bank opens every Tuesday and Wednesday from 8 to 11 a.m. by appointment to provide people in need in the community. Moreover, the church serves as a voting station and involves in the county volunteer fire department.

Freeman said the church has plans to become more committed to community life.

“We are looking into getting involved in Pike Country schools, extending our food and clothes pantry as well as upgrading our technology equipment’s with computers and tablets,” Freeman said. “It will help us in both short and long term.”

Freeman welcomes people in the area to come and join the church’s worship in a loving and accepting environment.