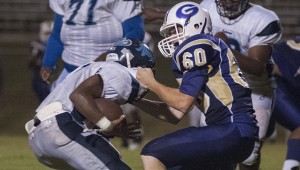 No. 60, Braxton Stewart, works to bring down the Calhoun ball carrier during their most recent match up. The Eagles beat the Tigers 42-18. The Eagles will travel to Dothan to face the Houston Academy Raiders.
MESSENGER PHOTO/JOEY MEREDITH

The Goshen Eagles will travel to Dothan this Friday to face an athletic Houston Academy.

The Eagles, who are 3-1 for the season overall and 3-0 in their region, are not dismissing the fact that the Eagles are scheduled to play the Raiders for their homecoming game.

Looking back at this past week’s practice, Snyder said the team had been working hard.

“We’ve had a pretty fair week of practice,” Snyder said. “Our guys have worked hard. We hope that’s what it’s done is to challenge those guys. Because this is it, they didn’t pick you because they wanted to go to the homecoming dance sad. They’re wanting to win.”

Last week’s game against Calhoun ended in a win for the Eagles, but the Tigers opted to play a 12-minute second half with two six-minute quarters. Snyder said it didn’t hurt the team, but it wasn’t necessarily something he enjoyed as a coach.

“Well, you go into games sometimes expecting that to happen,” Snyder said. “We like that because that means we’re ahead enough, but you spend a lot of time working to get kids ready to play and we want to get everyone in the game and at least have a second half to where we can work the varsity a little more and get some other guys in that we need and allow a few others to go in and get their time in to play.”

The Eagles will be traveling to Dothan and kickoff is slated for 7 p.m. on Northcutt Field.