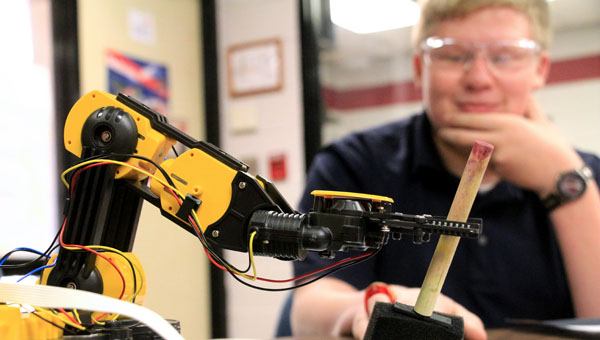 Above, Brian Lareau watches as a robotic arm operated by a classmate paints on a sheet of paper. The Troy-Pike Center for Technology robotics team uses the robotic arm to practice controls as they prepare for the upcoming BEST Robotics competition,which kicks off September 27. (Messenger Photos / April Garon ) 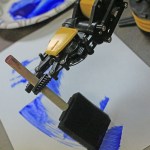 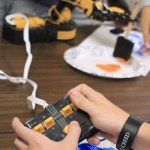 Students involved with the Troy Pike Center for Technology will be participating in the BEST Robotics competition.

The competition is designed to “engage and excite students about engineering, science, and technology as well as inspire them to pursue careers in these fields,” according to organizers.

“I was told about (BEST Robotics) because I was interested in math and science,” said Krishna Patel, president of 2014 TPTC team and a senior from Charles Henderson High School. “But this is not only about math and science. It appeals to people with so many different interests.”

Patel said the competition also involves sales, marketing and cheering. The teams will be graded on the robot performance, engineering notes and marketing plan.

The reveal and kick-off for the competition will be Sept. 27 at Carroll High School in Ozark. There will be 18 schools from the southeastern region of Alabama participating in the event. The theme for this year’s competition is Bladerunner.

Patel said after the kick-off, her team will know more about the rules and regulations and will make game plans for competition accordingly.

“I want to plan everything out ahead of time so it will go smoothly,” Patel said. “I also want to go all out this year and make sure everybody puts in all their effort (to the competition).”

Before the teams start to compete on Nov. 8 at the Ozark Civic Center, they are allowed time to come up with ideas, to build and test the robots. Patel said they will have an event called “Mall Day,” to practice controlling the robot’s performance. It will be similar to an exhibition at the local mall, which has been held at the Wiregrass Commons mall in Dothan previously.

The competition will take six weeks total, and the winners will move on to the regional competition in Auburn.

Brian Lareau, former TPCT team president and a senior from Charles Henderson, said his four years competing in BEST Robotics had been a great experience.

“We did a lot of thinking about what we were going to do before starting to build the robot, which is a more fun part,” Lareau said. “We did a lot of testing before the competition, and we really improved from the beginning to the end, to make adjustments for the robots to work better.

“We have also tried to get members of the bands and cheerleading teams from local schools to participate with us, but sometimes it doesn’t work. I’m hoping we can put in a lot more engineering methods in building the robots since this is the second year I have taken an engineering class and there are more people taking engineering in the team.”

Patel said participating the robotics competition helps her learn to see how things come together to make the robots work.