Find a groove: Trojans look to ‘hit stride’ during game against Davidson Friday 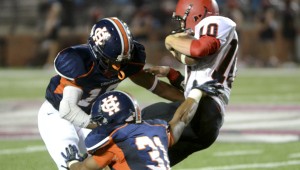 Fresh off a 69-30 win over Alabama Christian this past Friday, the Trojans of Charles Henderson High look to host a physically impressive Class 7A Davidson High School squad from Mobile, this Friday in Troy’s Veteran’s Memorial Stadium.

The Davidson Warriors are 1-3 on the season, defeating Mary Montgomery 44-21 before dropping consecutive contests to Spanish Fort 38-7, Theodore 14-7 and Foley, 27-21. The last two losses came late in the fourth quarter.

CHHS Head Coach Brad McCoy knows the Class 7A team from Mobile will be a big, athletic opponent versus the Class 5A CHHS Trojans, but he believes his 2-2 team has made many positive improvements in recent weeks.

“I was really proud of our team, going on the road, playing a really good football game,” Coach McCoy said of last Friday’s win over ACA. “The thing is, being a region game, begin the next one after a tough loss to Greenville, we needed something positive to happen to this football team. Our guys came out, and it showed that they were going to do everything it took to make big plays and put us in a position to win the ball game.

“It started out from the opening series and never really let up for the whole game. I was proud of our team, I was proud of our coaches, everybody did a good job during the week at practice leading up to that game in preparing, and it worked out in our favor.”

“Marquise is our strong safety, and we gave him the Player of the Week,” said Coach McCoy. “Marquise played last year, and he is a kid that is getting better in his leadership qualities, and is a tremendous player anyway. He had a big night and I was proud for him . He deserved it. He comes to work every day, kind of with the same demeanor and the same workman-like attitude, and he did a good job for us.”

Coach McCoy hopes the refocused attitude of the Trojans to play with more aggressiveness and leadership has translated into a better football team, which will be needed to play with Davidson.

“Davidson High School is a bigger school coming in here, they are 7A, and they are big, fast and physical,” said Coach McCoy. “Fred Riley has been there a long time and does a tremendous job. I have got to see a couple of Davidson teams first-hand years back, and that’s what they are. They are a well-coached football team. They are fast, the kids are aggressive, they run to the football, they got the capability of making big plays on offense, and they have quite a few Division I calibre players on this team that we have since heard about since we started scouting them.

“They have got to travel a long way. They are sitting at 1-3 and dissatisfied with where they stand right now. They have lost the last two games by a touchdown each, to two 7A region opponents, and they have a lot they are wanting to prove. We are trying to sustain and trying to get better. We are looking at our second half of our season we are trying to get ready for, and this is where we want to start playing our best football. We want to really start hitting our stride right now, especially going into the next four games that are all region games. Although this is not a region opponent, it is another opportunity and a great opportunity for us to get to play a bigger school, in our home stadium in front of our people, and maybe we will just see what happens. We have got to play our style of football and continue to do the things we are getting better at, such as play as a team, and show that we have leadership and have guys step up and make plays for us.”

The Trojans will have a special look this Friday evening, as the coaches will be wearing pink polo shirts and the players pink socks to bring recognition to Breast Cancer Awareness.