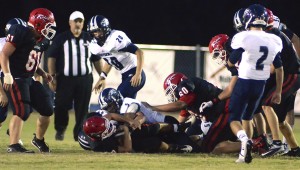 No. 61 Alex McCowan looks on as a fellow teammate is being brought to the ground by a Providence Christian defender.
MESSENGER PHOTO/APRIL GARON

“We’ve been talking about finishing drives, and those are one of the things we worked on this week,” Bowers said. “That’s going to be a continued emphasis (Wednesday) at practice and in our walk through.”

As the season has progressed, Bowers said several members of the team had improved and developed as athletes.

“A group of guys that have really progressed since the beginning of the season would be our offensive lineman. You can go back and watch film from our preseason game and even to last week’s (and see the development), just at the level that they’ve been playing at,” he said. “It really makes me proud. Our tight end is our only senior on offensive line, and he really pulls them together.”

While the Rebels have six seniors in their starting line up, Bowers said the team had taken a proactive stance when it came filling their spaces next season.

“This year what we’ve tried to do is to make sure that we are also working in some younger guys in the spots for those seniors,” Bowers said. “This senior class is really taking those guys under their wings and showing them the ropes. They just provide a lot of leadership for our football team.”

Bowers said with Kinston the Rebels matched up well athletically.

Even though Friday’s game is not an area or region game, it is a rivalry.

“Well, this week is not an area game, or region game, but it is homecoming, and it is a rivalry for us,” Bowers said. “The biggest thing we tried to stress at practice was focus. Homecoming isn’t for us it’s for alumni. It’s not about us. We want them to have a good time, but we want the players to focus on Kinston Friday night.”

Friday’s matchup between the Bulldogs and the Rebels will kick off with the presentation of the homecoming court at 6:30 p.m. Kickoff is 7 p.m.