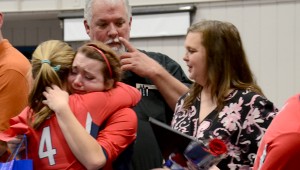 Senior Taylor Wilson accepts her gift Tuesday night during Pike Liberal Arts’ senior night for the volleyball team. The team lost to the Glenwood Gators, but assistant coach Allie Park said the girls all played with an extreme amount of heart during the last home game of the season.
MESSENGER PHOTO/SCOTTIE BROWN

The team lost three straight games to the Gators with scores of 24-26, 23-25 and 17-25. Park said while Glenwood was a good team, the Patriots had not be at the top of their game when it came to serving the ball Tuesday night.

“Glenwood is a good team, and they had really good defense,” Park said. “Our girls played their hearts out. We didn’t serve that great tonight, so I’m sure that’s something coach Avant will want to work on at practice tomorrow.”

Tuesday was the last home game for the Patriots, and Park knew it was a sad time for the five seniors.

“It was their last home game, so they know what’s happening,” Park said. “They’re at the end of their season, and even though we lost tonight, the first two games were really good games. They played hard. AB (Amberlyn Baker) had some really good hits or kills. Savannah is our setter, and she did an awesome job tonight, too.”

But Park said a player who had consistently been a leader for the team was Grace Capps. Capps has been playing volleyball since the seventh grade, and plans to attend Auburn in the fall.

“Grace has really been a leader and someone that I think all the girls look up to and kind of trust. All the seniors are great, but she’s been the one that leads team.”

The Patriots will travel to Ashford High School in Ashford to face the Ashford Yellowjackets Thursday.