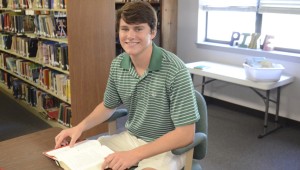 For a student leader like Jeffrey Saunders, time-management and self-study are among the most important skills for success.

Saunders is a senior and the SGA president at Pike Liberal Arts School. He is also involved in many student clubs, sport teams and community activities.

At Pike Lib the SGA is in charge of planning and setting up homecoming, fund-raisers and other events like Drug Awareness Week. When the school needs volunteers, SGA is the first group to be called. However, the SGA’s responsibilities are more than that.

“(SGA work) includes a lot of small details behind the scene,” Saunders said. “It’s a big time commitment especially in preparation for homecoming.”

Saunders became involved in SGA in eighth grade as a representative. “I want to have a positive effect on the school so when I leave it’s a better school. I enjoy being in a leader position not because it gives me a tittle but because I actually enjoy being able to help people in the school.”

Saunders said the previous SGA president gave him advice and encouragement when he decided to run.

“She helped me a lot to believe in myself to be a good president because I was really nervous,” Saunders said.

Saunders is also involved in government club, Excel club and community service club. He said being in school clubs and community organizations helps him branch out and meet a lot of people.

Despite his busy schedule with school work and extra-curricular activities, Saunders said he likes spending time playing sports. He plays tennis for Pike Lib and soccer for the city league.

“(Playing sports) is a chance to get away from the stress at school and everything else,” Saunders said. “I can just relax and have fun.”

Saunders already has plans for his academic future upon graduation from Pike Lib. He has applied to Auburn University, University of Alabama and University of Mississippi.

“I have visited all three colleges,” Saunders said. “With Auburn and Alabama, I like the location and the campuses. Ole Miss is something new and different.”