Contest: Hats off to the leaders 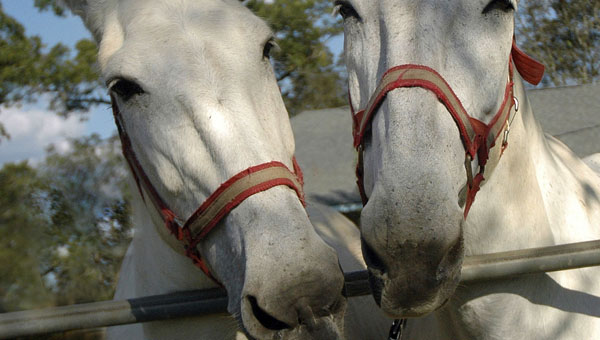 Pete and Jenny are leading in the Human Society of Pike County’s 2015 Pet Photo Contest but the contest isn’t over until the cats yowl and the dogs howl. The contest ends at 5 p.m. Sept. 30.

As the Humane Society of Pike County’s 2015 Pet Photo Contest comes down the stretch, Don Renfroe’s Pete and Jenny continue to be in the lead but the dogs and cats are fast on the heels of the matched pair of mules.

Renfroe said 20 years ago, maybe even 10 years ago, he wouldn’t have been surprised that his mules would generate a good bit of support in the contest.

“But, folks today don’t have much interest in mules,” he said. “I entered Pete and Jenny to let folks know mules are still around and I was hoping that, maybe, somebody would get interested and want to know more about these fine animals.”

Renfroe said mules carried the work burden of young America on their backs and are the connection to rural America’s rich cultural heritage.

“Mules provided the power in the cotton fields and peanut fields and in the coal and logging industries,” he said.

“Mules made up our country’s military pack animal units until after Korea and they are being used by special operations soldiers in the mountains of Afghanistan and Iraq. So, I just thought mules needed at little recognition for all they have done for our country.”

But, Renfroe, said the Pet Photo Contest is about more than getting a pet’s picture on a calendar. It’s about reducing the number of neglected animals in Pike County – “about preventing animal abuse,” he said.

“There’s a poster that reads, ‘Don’t Litter. Spay and Neuter’ and that’s what we have to do if we are going to reduce the number of abused, abandoned and neglected dogs and cats in Pike County,” Howard said.

“So, we encourage all Pike Countians to go to the Humane Society of Pike County’s website at www.pikehumane.org and vote for their favorite entry in this year’s Pet Photo Contest. Votes are $1 each and every dollar makes a difference.”

The 13 animals with the next highest number of votes will be featured as pets of the month and fifty-six animals will be weekly features.

Voting may be done online at the humane society’s website or votes may be mailed to Pet Photo Contest, P.O. Box 296, Troy, AL 36081.

Votes may also be cast on site at The Little Framery, Troy Antiques or Guynn’s Income Tax and Bookkeeping Services in Troy or Hillside Antiques on Highway 231 South or Brundidge Florist in downtown Brundidge.