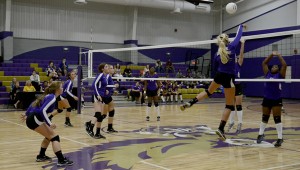 Goshen teammates look on as No. 8 Kati Thomas jumps to send a ball into Pike County territory Monday night in Goshen’s cross-county match against the Bulldogs. The Ealges beat the Bulldogs in three straight matches 25-14. The Eagles will travel to Ozark Thursday. The Bulldogs will travel to Skipperville.
MESSENGER PHOTO/SCOTTIE BROWN

Goshen won three straight games against Pike County with scores of 25-14 across the board. Goshen head coach Amy Warrick said it was a good night for the Eagles.

“We had played three games, and they were the same score,” Warrick said following the game Monday. “Can you believe that? It was a good night. I know that Katie and Casey led the team with kills, and I think Casey had more kills tonight. They both had great nights at the net tonight.”

While Warrick said her team was able to do well defensively, she said the game was mainly a serving one for the Eagles, but it was a team effort in the cross-county win.

“We served for several straight in a row,” Warrick said. “It was mainly a serving night. It was just a team effort. It was a big county win. We always like to play Pike County because it is a cross-county rivalry, so it’s fun.”

While it was a large win for the Eagles, Warrick said there were still a few things the team needed to improve on to be where she would like to see them before the end of the season.

Warrick said she expected a lot out of her girls and that she did not judge the team’s ability to play on winning, but by how they looked on the court.

“I’m proud of them,” Warrick said. “I expect a lot out of them, so I don’t judge them just because we beat somebody. I think it’s great we beat them, but I judge them about how we look.”

The Eagles are currently 10-3 counting the tournaments Warrick has played the team in. The Eagles will travel to Ozark on Thursday to face the Carroll High School Eagles.

Head volleyball coach for Pike County, Shea Driggers, could not be reached after the match for a comment. The Bulldogs will travel to Skipperville to face the Long High School Rebels on Thursday.